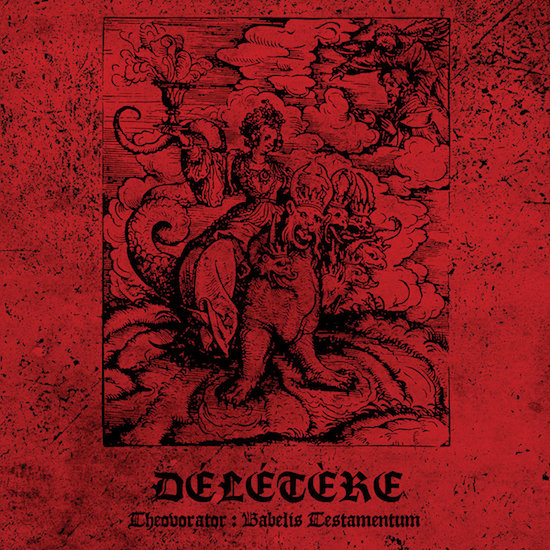 You know the story of the two sides of the coin, don't you? Black metal from Québec is one of these coins. Some say that all bands have the same sound and the same approach, but others are of the opinion that these bands have created a new style under the banner of "métal noir québécois". Well, maybe it's no new style, but an unmistakable identity. Délétère play exactly the style that everybody has in mind when it comes to the francophone Canadian metropolis. Sound cascades like waterfalls take possession of the listener and draw her or him into a nightmarish scenario. Almost overlong song patterns and guitar lines which are sometimes repetitive but always effective set the right frame for a trip to the end of time and back.

Délétère are not lazy and therefore they deliver three new songs, even though their last album is just eleven months old. That's a remarkably short period, but who wants to stop creative people as long as they write fanatic black metal tunes? Me not. Speaking of creativity, the promo sheet wants to make us believe that "Délétère distills its very own essence of powerful, raw, and melodic black metal", but to mention a very own essence is ridiculous. As mentioned above, the opposite is true. The formation does not hurt the guidelines of the sub-genre and I enjoy it the way it is. The three tracks cover all facets of MNQ movement and the profound, alternating anthemic or fast guitar lines prevent any form of boredom. Of course, the bar has been set very high by De Horae Leprae, but the EP is willing and - nearly - able to challenge this mighty album. Sacral keyboards add an atmospheric touch and lend the opener an eldritch touch. However, the band mostly prefers fast sequences, in short, the here presented songs exactly follow the route that the band's previous material has already taken. Fans of the former outputs can buy this work blindly.

Maybe the last ounce of currishness is missing and the religious yet ill-fated character of De Horae Leprae does not reappear in full bloom. Nevertheless, all songs convince and the threatening guitars at the beginning and the end of "Milites Pestilentiae III – Babylonia Magnissima" create some of the best moments of the EP. However, Theovorator: Babelis Testamentum is immune against feeble parts and its playtime of roughly 20 minutes is not too long, to say the least. The appropriate, dense sound completes the picture. Forteresse beware, because Délétère have the potential to pen a full-length which could oust "Thémes pour la rébellion" from the throne. Either way, Québec can be proud of triggering the most exciting wave in terms of present extreme metal. And that's exactly the reason why I forget the other side of the coin right now.