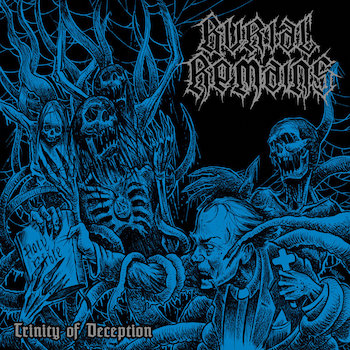 Burial Remains is an act comprised of members from Fleshcrawl and Grim Fate to name a few, and what they have gathered their resources and knowledge to unleash is a new monster within the underground death metal sewers. Released on Transcending Obscurity, Trinity of Deception casts a spell on the listener booting them back to the mid to late 90s era of death metal. This hits with a powerful blow, guitars go hard on the HM2 pedals, bass lines vibrate heavily beneath the shredding distortion, drumming goes from straight up old school death metal to punkish thrashing. With many bands claiming to pay homage to the 90s, only few have managed to catch my attention; and Burial Remains is definitely one.

Featuring 7 songs of pummeling, fist to the jaw, bare knuckle style ruggedness, Burial Remains with Trinity of Deception conjure fast to mid-tempo piles of headbanging licks. The playing styles of both Fleshcrawl and Grim Fate can be heard trampling through heavy lines of rhythm and gnawing growls. Burial Remains are definitely out for blood on this journey, many bands have tried to release something that bows to 90s and only few really do manage to accomplish this without sounding un-original. Burial Remains don’t just appear to devour the flesh of the late 90s era but they savor the moment by implanting dominating lead riffs that go straight for the jugular, and with the production being so thick and abrasive, they sound like a stampede. Not forgetting the addition of guest vocalist Rob Hauber (Heads for the Dead and Revel in Flesh) who performed on “Burn With Me” adds yet another level of stone smashing heaviness. This is a decent offering of 90’s style death metal butchery, songs like “They Crawl” “March of the Undead” and “Burn With Me” pelt loas of steel from an ever spinning vortex of turmoil. Gotta love the riffing on “Burn With Me”, such killer licks that come storming from the alleyways of the old school adding a sway to the already condemningly heavy tone of Trinity of Deception. Hense said, it’s the best tune on the record that voyages like a rollercoaster through varying tempos and melodies. Such a great track that is followed up by yet another skull bashing power surge of guitar leads in the form of “Days of Dread” whilst “Tormentor” puts the finalizing pounds on  the record with a candid thrashing display.

The only drawback is, I wish there were more guitar solos featured on Trinity of Deception, sort of what was given on “Burn With Me”. Had more of the record been crafted within that vein I think It would have reserved a spot in my top old school death metal love letters so far for 2019. The absence of adequate solos were a bit of a bummer especially after hearing the melodic tone on the opening track "Crucifixion of the Vanquished". However, Trinity of Deception is only 25 minutes and has enough to prevent musical stagnation.

For a first effort I’m both pleased and let-down (a slight bit). Hence, Burial Remains have the sound nailed, however had there been more killer solos in the vein of what was heard on “Burn With Me”, they could have easily put out a more concise and fluent old school death metal record. Good entry, let the next one be better.