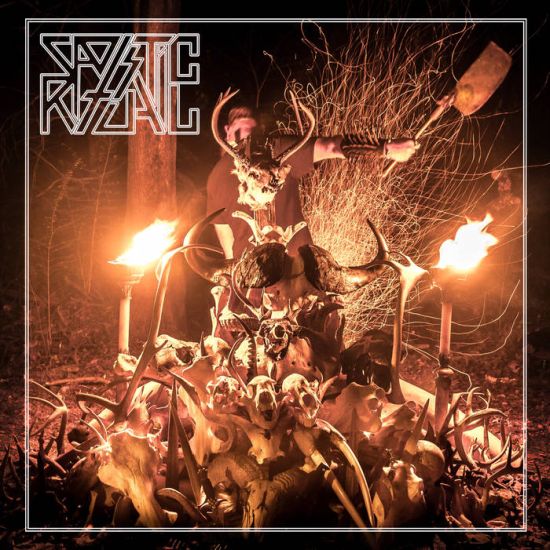 I stumbled upon these guys through their association with Vimur, who are a nice little Georgian black metal band I've gotten myself acquainted with lately. I was also intrigued by the association with Cauldron Born, given the rabid cult following that band seems to have behind it. I guess mostly I’m just starting to become increasingly fascinated with everything that Charles Southern plays on, because he’s got a great ear for riffs and he maintains this certain sort of stylistic precision while he’s playing in each band - I couldn’t necessarily tell you that Vimur and Sadistic Ritual have the same guy behind them, but both of them have a quality to their riffs where they’re more enthralling than they should be, especially given how ordinary they seem on the surface.

I can tell there’s something special going on in Visionaire of Death because, well, I like it! I don’t listen to a lot of thrash, but to be fair if I was going to throw it on, this is the kind of stuff I would probably reach for - the merciless, brutal pounding that mixes a thrashing sharpness with a thick, death metal intensity a'la Demolition Hammer, with some Dark Angel overtones reimagined with a new-school production style on top. The riffs effortlessly slide their way into your brain, cutting through clear as day, with a healthy, surprisingly non-gritty bass presence and some modern extreme metal-informed drumming from Joe Sweat (sick fucking name by the way, dude). Just because you’re primarily inspired by thrash bands from the late 80s and early 90s doesn’t mean you can’t throw in the occasional modern blast to spice things up a bit, and Sweat makes sure to deliver on this front, which helps this album holds its own in a world where there’s things that are leagues more intense than thrash metal. You can no longer have a few Slayer worship riffs and some fast parts and automatically be considered “extreme metal”, so I think it’s important for thrash to utilize some modern influences in order to stay relevant, which I think the drumming and production are more than able to provide. 'Executioner' is a thrash song that probably wouldn’t have existed in the form it does in 1991, but oh boy am I sure glad it does now.

This also lacks the sloppiness and crude delivery that turns me off some strains of thrash - in order for the riffs to hit me properly, I need them to be cutting and precise, and fat has been trimmed quite well from Visionaire of Death. The mastering job is super clinical with no extra trailing notes left in the mix, and I’d be very surprised if the drummer didn’t rigidly adhere to a click track when recording these because he has a near robotic sense of timing (in a good way). It can be easy for riffs in this genre to get stale, and Sadistic Ritual doesn’t really diverge much from their formula of ripping, heavy thrash and stomping mosh verses with an extra bit of bite, but it’s explosive and punishing enough to make up for any lack of originality. The vocals have a nice, hissing rasp with maybe a bit of hidden black metal influence - again we see Sadistic Ritual informing themselves with modern aesthetics. For all I know this is just another generic entry in a style I’m unfamiliar with, but Visionaire of Death scratches the itch I do have for this stuff when I’m in the mood. Charles Southern may be something of an underrated up-and-comer in the metal scene you might need to watch out for in the next few years. Sadistic Ritual is absolutely nothing new, but it’s reimagined with enough enthusiasm to reinvigorate the style.