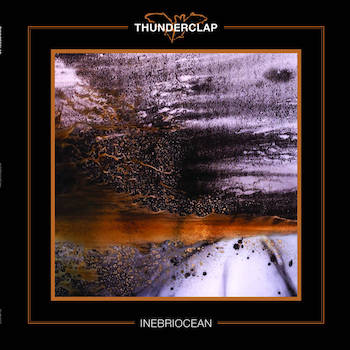 Thunderclap plays a gloomy, sludge infused, rock 'and 'roll influenced style of doom metal. Released under the banner of Financial Ruin, (a rather obscure label), the band has created an underrated gem of sorts. Here's another that just lifts the bar in terms of getting the right balance of doom and sludge metal. Many times, I have to turn away, as it seems bands try so hard to reinstate that they are a doom metal band with loads of fuzz that buries any sign of actual instrumentation. This causes negative effects, as they only manage to create a wall of distortion. Not here! Thunderclap brings the musicianship to the forefront of the line in a confident display of smooth startling sludge and doom metal. This shines in every aspect and is a glorious find of 2019 that can stand amidst the titans of 2018 and prior.

Giving the listener a front row seat to the cinematic intro that paints a cloudy yet mellow scene, Thunderclap strikes thunderously with the very first song on the record “Inebriocean”, and what a banger of a song this is. Blissfully memorable in its grandeur awakening that goes through multiple changes, heavy opening followed by a smooth transition to a bluesy dimming piece of instrumentation that picks up the tone with crushing guitars and vocals that agonizingly cry out “What are you waiting for”. The following song is the highlight of the record, its stone heavy with a pessimistic quality that is accurately delivered; so groovily delicious that I find myself comparing it some of Crobar’s music. “Low End” is ripe with towering mountains of emotion that crumble on the listener like an avalanche of sorrow and agony.  Just by the sound of it, you're left to daze helplessly as mammoth walls disintegrate and crash to the earth in the most cinematic way imaginable. This is what music should do, move the listener, take him/her from the experience of just listening, to becoming a part of it. The way Thunderclap builds the atmosphere only to tear it down is almost unmatched by anything I have ever heard in doom/sludge metal. Such passion and feeling consumes the listener/s that “Low End” and eventually the totality of Inebriocean becomes something of immense greatness smeared in atmosphere.

The memory of the self-titled song “Inebriocean” and the unmatched force of “Low End” that gives one the impression he/she is being caved-in by titanium walls of regret and sins, lingers like a dark cloud over every song following, as though reminding you of an inescapable past whilst harboring all kinds of pessimistic thoughts. Even through the rock and roll sensation of “Capsized” you're still left in an indistinct state of incomprehension as the contrasting tempos of “Low End” and the former go to battle against each other. Even the mid-tempo rowdiness of “47” can do nothing to pacify the energy expelled from “Low End” and “Inebriocean”. Heck, even to the psychedelic “Black Crow Horizon” is easily outwitted by the momentous goliath of the opening moments on Inebriocean. Though still predominantly morose and bitter sounding are the entries following “Low End”, they still succumb to its inordinate hug.

The overall performance on Inebriocean is overwhelmingly good, not a note of meaninglessness is played, even when trying to combat the unforgiving monster they crafted known as “Low End” by means of psychedelic, rock 'and' roll and even upbeat, jolly sounding tempos, Thunderclap could not subdue the entity they summoned. The final tracks are still good but sound like a band on the verge of defeat by their own hand, thus retreating/fleeing with “Low End” standing victoriously. If new material is ever a thing of reality from Thunderclap, I hope they embrace the “Low End” route wholeheartedly instead of running from it. Inebriocean is a fantastic record, more people need to discover this auditory diamond.