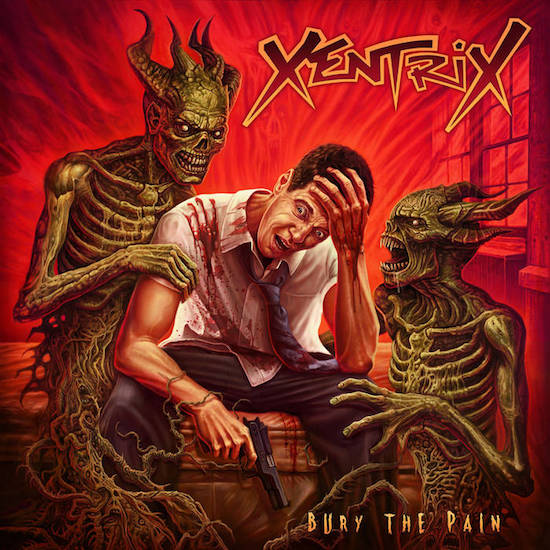 Buy on: Bandcamp
Type: Full-Length
Release Date: June 7th, 2019
Label: Listenable Records
Genre: Thrash
1 Bury The Pain
2 There Will Be Consequences
3 Bleeding Out
4 The Truth Lies Buried
5 Let The World Burn
6 The Red Mist Descends
7 World Of Mouth
8 Deathless And Divine
9 The One You Fear
10 Evil By Design
MetalBite on YouTube

Is it still only a temporary thrash metal survival or has this glorious style finally become a constant value in the music business? Newcomers from all directions show up and some veterans take up the challenge. Even a band like Xentrix comes back, although the quartet has never had the luck to sit on a place in the first row of the sub genre's theatre. It is therefore all the more surprising that their first album after 23 years of silence really has something to say. Forget the lukewarm Kin and, if you like to do so, join me in ignoring Scourge. Here comes a vehement thrash attack that does not intend to offer polished riffs for frustrated housewives. Xentrix have forged a muscular output with a great sound that gives the voice and all instruments room to develop their strengths. Even the bass sounds powerful and clear, hallelujah! Some people say that Andy Sneap's productions are almost sterile and all of them sound the same, but I disagree. This is a modern yet organic production that does not hurt the old school flair of the music. Especially the drum sound reaches perfection and I think it makes sense to use today's technical possibilities in order to reanimate a great style from yesterday.

Indeed, Xentrix jump back in time. This is the real successor of their first two albums and this alone speaks for the integrity of the dudes from Preston. The music emanates the original charm of thrash and a kind of working-class awareness. The band rather works thrash than to play it. Everything sounds like the result of a physically demanding eight- or ten-hour shift, but this gives the compositions just some more grains of authenticity. Of course, the fact that the band goes back to its roots - there are still two members of the Shattered Existence line-up involved - eliminates an overdose of innovation right from the beginning. Now one could moan about this fact in general and especially the opening title track seems to be heavily influenced by Gary Holt's "Scar Spangled Banner" from the year 2004. Honestly speaking, I notice it, but it does not matter. The song has a lot of energy, drive and vitality, that is what really counts. Better still, these characteristics shape nearly the whole album.

Admittedly, "The Truth Lies Buried" does not hold many exciting elements and every now and then Xentrix take the wrong exit. The very promising verses of "Deathless and Divine" attack strictly and with pinpoint precision, but the chorus with its ineffective melody fails to crown the track. However, such things remain exceptional. The double bass onslaught "Bleeding Out" comes in like a battering ram and the double strike in the centre of the album, namely "Let the World Burn" with its very dynamic chorus and "The Red Mist Descends", illustrates perfectly that the musicians know how to perform accurate thrash riffs. It is really a pleasure to see that they did not feel the need to add melancholic or overly melodic elements to their harsh basic orientation. Two acoustic intros are all that they offer in terms of thoughtful silence and this is enough, if I am not mistaken. So, let the thrash metal hammer rule, enjoy the vocals of Jay Walsh whose voice lies in close proximity to that of Chris Astley and bang your head. I admit that these words sound stale, nevertheless it is the best one can do when it comes to this release. Its only significant mistake is the stupid artwork. However, there is one thing I want to know about it: is the man with the handgun the dude we met first time on the cover of For Whose Advantage? Has he realized the effects of the financial crisis, for which he and his criminal business partners is to blame, albeit with some delay? Well, the crisis seems to be banned, but old school thrash metal is more present than ever.