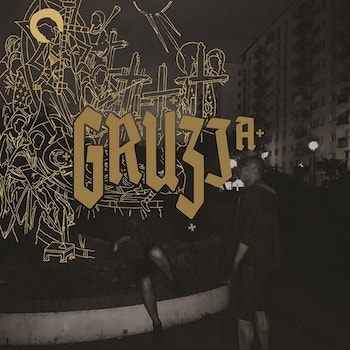 The buzzing city life of the day takes hold on the human mind in so many ways, whilst the notion of escaping it all with what you have, crosses the mind ever so often. What lies at the end of each day, for some a reward for others the greater burden of reliving the day. In the futile attempt of seeking happiness we come to terms with ourselves and realize the strengths of our wants. When in search of reason we find indulgence and lust, when granted lust we find purpose, a meaning to the corrupt cycle of living with the burden of ethics. Gruzja takes the listener on a journey behind the scenes of everyday faces to show you how much mess they crawl through to get to where they are. Also, the faces of those who slither within the mess just because they love to. Beaten down by the burdensome task of achieving expectations set by others one still has to come to terms with his/her own personal struggles and indulgences.

What's the music like on Gruzja’s I Iść Dalej? Sound-wise its black metal, thematically it seems like social issues are the center focus of the lyrics. After doing some research the topics appear to range from urban degeneracy, alcoholism, anxiety and scars of the past, so to say. Most lines are very cryptically written but offer just enough to at least paint an image in ones head to work with. A video was published for “Opuść mnie” which tells of the demoralizing torment adult movie actors are greeted with as an integral part of the entertainment they offer, it’s an interesting subject to highlight on a record such as this one. The dark side of pleasure indeed, what’s really happening under the red carpet makes its way to the scenery in some ways. Black metal is usually rooted in Satanic philosophies and ideologies, but Gruzja offer a new take on the genre with the traditional black metal sound fused with some punkish groove sections that I’ve been liking especially since hearing the likes of Truchło Strzygi.

Another interesting song is “Manam” that mentions “koro” which is defined as the fear of genital retraction or vanishing. That’s something I’ve never heard of until now, and to think that it’s a reality in which a considerable populace copes with is quite the eye opener. Never thought I would hear such a topic enigmatized and brought to light on a black metal record. That's some real anxiety and a frightening thought to be living with; it must be absolutely fatiguing to have those them running through one’s head on a frequenting basis. As to how one even develops such a phobia is unbelievable. I appreciate the structure of the songs mentioned, especially “Manam”, it opens with a very, very, very Inquisition-esque riff that I'm sure many supporters of the band will pick up on once heard; then dissolves into a bluesy mellow ambient doom section that flows into the lead riff.

Musically all the songs are memorable and different from each other; offering a wide range of groove, blast beats, harsh growling (that I found to have an identifiable sound) and some clean chants/singing. The production is just right for something such as this, there’s a rich gritty sound that reinforces weight of the topics brought to the surface.

After 25 minutes of sensational extreme music, Gruzja decides to bring I Iść Dalej to closure with a club beat that could be thematically connected, however, I don’t think this step was necessary as the prior songs were strong enough for the listener to gain some understanding of the concept. In Gruzja’s case it works out, just lower the volume because the bass is very loud on that track. Lots of mid-paced sections take command on I Iść Dalej with songs like the previously mentioned “Manam” and “Moja Ratyzbona” utilizing a very heavy, riff driven style of playing. That said, most of the record is situated within the mid-tempo in so adding a thicker layer of heaviness as the guitars and vocals are delivered with gruffer. I like just how bare-faced the music is or perhaps gutsy and un-apologetically heavy sound-wise, hence giving a feeling of pondering and combating many personal issues. Adding to that is the Polish accent that makes black metal barks/growls sound crueler and sharper, and on I Iść Dalej they come out as un-embellished as one could imagine.

I Iść Dalej is a fun and mostly considerate record that should be receiving a lot more attention. Gruzja’s produce on their debut record is a unique and enjoyable one that branches away from the norms of extreme metal. Not many bands can create both an enjoyable and memorable record whilst sporting a different angle of the genre. Though only black metal in terms of the sound, I Iść Dalej has enough to appeal to the listener weary of the norms. Great debut, hopefully there is more to come from Gruzja soon.