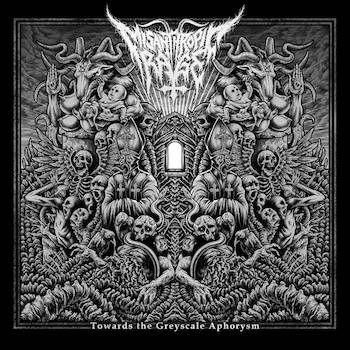 If avant garde black metal had a tower or nexus somewhere in the universe, then Misanthropic Rage would be one of the authoritative figures within that domain. Crafting melodies of pessimism, this duo releases their third record on Godz ov War Productions with aims of further pushing the boundaries of black metal via incorporating metal and non-metal elements. Having heard their previous offering Igne Natura Renovatur Integra released in 2018, I found the album to be too much of a melancholic event that deterred my likeness and demagnetized my interest to some extent. Citing songs as being too depressive, I fell out with the record as the songs progressed, however, the music was excellently composed thus forcing the better hand of my rating.

Hence mentioned, how is Towards the Greyscale Aphorysm being conducted and in what direction does the music go this time around. Upon reading the title I was somewhat curious as to what was being discussed on the record; after research and scouring through some lyrics, it appears Misanthropic Rage is questioning the level of truths to be found (if any) within traditional superstitions or beliefs (I might be wrong). The music on Towards the Greyscale Aphorysm is a step up from the previous record, having toned down on the depressive aura and replaced it with more ominous vibrations such as on the Gothic-esque nature of the title track and the aggressive overtone of “The Noise of a New Dawn”, you're drawn to attention by what Misanthropic Rage is trying to achieve. Those Gothic vocals lift the veil in showcasing just what are the intentions of Misanthropic Rage.

With each layer of music capturing a certain feeling that correlates with the assumed theme and lyrics of the record, a stream consistency is established as the music so accurately gives representation to the thematic content. Such a versatile array of musical methods are gleaned, ranging from traditional 2nd wave black metal tremolo picking, death metal growling, Gothic singing, melancholic spacy keyboards, plus more. In comparison to the the last entry I enjoyed Towards the Greyscale Aphorysm for the most part, only one instance of distaste did occur but it’s no big deal, just the biases of my preferences acting up. The tracks this time around sound leaning towards a very healthy handful of hatred and misanthropy. “Malediction” and “Here is Deeper Here is Higher” are favorites that show a mesmerizing blend of genre staples, thus signifying that avant garde metal being made by Melancholic Rage is not done as a chore. rather an unhinged love for exploration and diligent musical craftsmanship.

I find that post-metal has been introduced and integrated to the band’s formula, as can be heard on the song “The Traveller” which is by far the longest song on Toward the Greyscale Aphorysm. I think this song could have been much shorter or even absent, as I was never engaged by the music. I admire the wailing guitars at the opening; it's quite the melancholic piece but never quite moves or climaxes from it’s main riff. Though applying a minimal change in tone, the music presents a state of stagnation, however I think that was the effect Misanthropic Rage was targeting; I just didn't see it as a necessary installment.

The vocal on this particular outing is crammed with feeling and passion, songs such as “Curse Despise Reject Deny”, “The Noise of a New Dawn” and “Nothing but Rage” (I think they read my prior review) are summoned with chest pumping passion further inflating the effect of the music. Hence, it must be said the guitars really put on a show for the listener in their ability to deliver sensational leads and solos excluding “The Traveller”. This played a key role in painting the many musical shades attributed on Toward the Grayscale Aphorysm. Same can be said for the drumming as it showcases a steady input of matching sections in support of the guitars.

Towards the Greyscale Aphorysm is a significantly better entry than that of 2016, it’s a strong addition to Misanthropic Rage’s catalogue and a heads up for anyone seeking avant garde metal worth listening to and investing in.