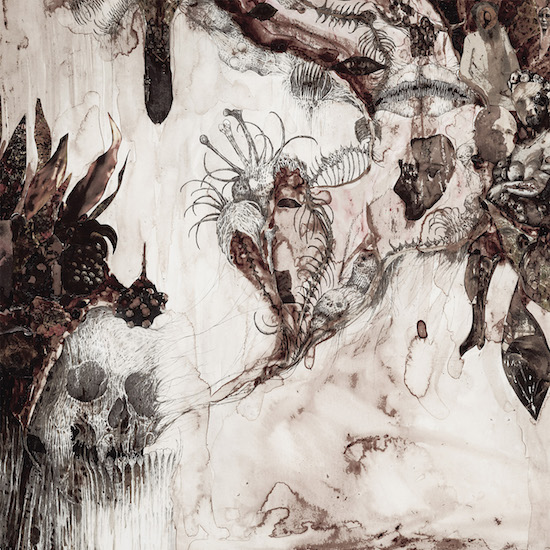 Perhaps the most emotionally intense black metal record of 2019; Celestial Grave reiterates why Finland is the capital of quality metal with their debut full length Secular Flesh. Incorporating black riffing, scraping barks and howling, cavernous vocals, the members behind this crepuscular work of genius provokes the feelings and consciousness of the listener with a roller-coaster of tempos and intonations. Marked by a gritty, dissonant production, melancholic though violent compositions and a twisted blend of semi-raw black metal and saddening melodies, Celestial Grave with Secular Flesh play both hero and villain as the music on here drags you to the inexorable depths of sorrow and agony; then without warning lifts you from it with a destructive demonstration that gets you punching at the colossal body of grief. This unsound parade of melancholia and might hearkens to an ancient essence captured by only a handful of followers of its eternal flame with one of those being Ieschure’s "The Shadow". Having released a demo and an ep through 2016-2017, the band return to expand their visions of astral mystique and graveside emanations.

Apart from being overwhelmingly black metal, Secular Flesh exposes mark of death metal as an aiding proponent of vehemence, through the 31-minute-long excursion. It’s a welcome variation and even more necessary one especially when tasked with translating emotional content. I find some of the music often times reminding me of Ringare’s "Under.Pale Moon", minus the keyboards. The methodical vocals paint both a magical and mournful soundscape that can never be ignored; they’re such integral elements of the record, that if excluded and replaced by substandard or disjointed voices, the music would suffer greatly. I say this because the musicianship on Secular Flesh exhibits a family-esque bond, the kind that can only be broken by betrayal/dishonor. Being one of the main highlights on Secular Flesh, these vocals work in great coordination with the instrumentation in an attempt to forecast the thoughts held in planetary secrecy. Secular Flesh truly glows in the murkiness of its setting; being only 31 minutes long for a black metal album, Celestial Grave have a "less is more" approach that makes an alarming presence; hence the record is over just as you begin to peak enjoyment. The quality here is seriously high, especially for a fairly new band. I don’t know who are the members involved in this project, but I get the impression they have played roles in other more prominent and revered entities within the underground, either as session/full-time musicians. Secular Flesh is too good to be coming from a novice sect, and if that happens to be the case, then my claims of Finland being the capital of quality metal are reinforced.

Songs here exhibit progressive uneasiness through a recurring battle of despondent and angry waves of audio. Like being held down in restrain and repression only to secure the will to raise from the dejected state in-so freeing oneself. ‘Lamentation’, ‘Secular Flesh’ and ‘Gasping from the Lips of Night’ do this to great effect, by creating walls of anguish, then intervening with spontaneous bursts of anger to counterbalance and more-so portray emotional dissidence and inconsistency. This introspective journey is made effective due to excellent song writing; distorted tremolo riffs casts the building blocks of somber and misanthropic landscapes that are demolished by feelings of hatred, only to be re-erected, while conjuring and air of transcendental and astral mystique. The vocals express the dominant moments of lament, rage and anxiety emanating discontentment that overwhelms Secular Flesh. In self-contradiction of my musical preferences as they are quite biased towards depressive elements notably in black metal, I found enjoyment in this music as opposed to writing it off as I would do most times. My inclination however, resulted from the organized and succinct song structures, wherein lay an air of professionalism and purpose. It's always better when music flows naturally than appear strenuous. Secular Flesh is a timeless ascend towards ethereal transcendence by means of polemic, cascading emotions.