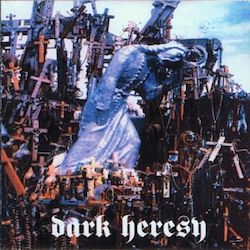 What a cool album title.

And its contents are even cooler. Dark Heresy was a short lived avant-garde death metal band from the United Kingdom that graced the world with one brilliant album, and a few preceding demos which I both have not heard and do not really care to hear; but that’s besides the point. Their 1995 debut “Abstract Principles Taken to Their Logical Extremes” is, in and of itself, quite abstract. And pretty extreme too.

I always pick challenging albums to review, ones that are usually pretty experimental and off-kilter and this one is really no different, and it actually might be the most bizarre one yet. Dark Heresy’s sound is a bit hard to decipher. Imagine if Morbid Angel started listening to a lot of Babylon Sad, Phlebotomized and Pan.Thy.Monium and they decided to make an album in the style of those bands. The opening track is the most straightforward death metal you get on the entire thing, complete with crushing riffs, menacing grooves and killer vocals, and even as the most “death metal” song, the riffs are still pretty weirdly constructed and transition in an oddball fashion. Once you’ve made it through that one, it’s about to get a lot weirder from now on.

The tracks are usually pretty lengthy, with 6 of the 8 tracks spanning over 7 minutes long. That being said, these are not death/doom tracks. For as much inspiration as Dark Heresy takes from the aforementioned bands, those bands all have a heavy presence of doom that Dark Heresy lacks. Their death metal parts, as stated above, are reminiscent of Morbid Angel and the death metal parts are extremely thrashy and ferocious. Everything that surrounds the death thrash parts is… very strange. There’s use of keyboards on a fair bit of the songs, and the vocalist is not afraid to throw in some cleans in a few of the tracks. They blend with multiple different non-metal genres to create a bizarre atmosphere that’s ever changing as the song goes along. Sometimes it’s medieval, sometimes it’s upbeat, sometimes it’s gloomy, and no matter where a song goes, it seems to always be loaded with riffs and blast beats that are expected from the genre. It’s similar in idea to something like say, Phlebotomized, but its execution is completely different, and the two bands sound nothing alike.

The sound of the album fits perfectly with the music. Not too rough around the edges, not too clean, just right in the middle. I love the sound of the drums, personally, but I am not an expert on production and mixing so my ears aren’t nearly as trained as some of the veterans on this site.

Unfortunately, this is one of those albums that, although I’ve always wanted to review it and I have finally sat down and given it my all to describe this album to the best of my ability, this truly is just an album you’re going to have to listen to. It’s so chaotic, progressive, experimental and left field that you’d be doing yourself a disservice to not listen to it at least once. Definitely a gem in the genre, and one that hopefully picks up traction with age to become more of an underground cult classic - more people need to listen to this.