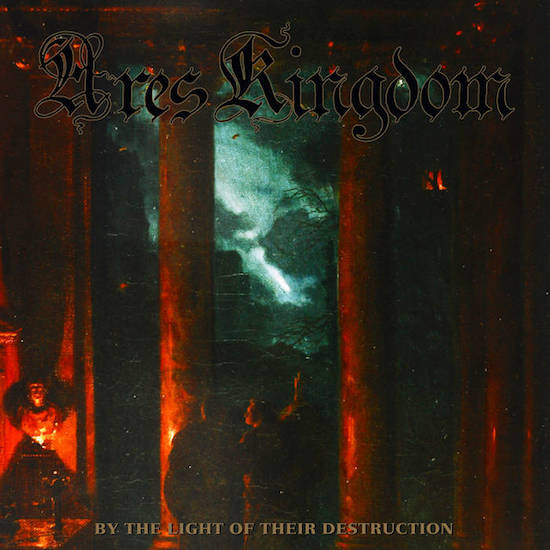 Ares Kingdom returns with a blistering new CD titled By the Light of Their Destruction. The band never ceases to fulfill high expectations with each release, so you might do well to always depend on consistency with these guys, and it's always a positive experience.

It's been four years since the band's last release, The Unburiable Dead, so we were long overdue to hear some new tunes from these guys. The Missouri trio issues the same high-quality music that they've come to be known for, and By the Light... picks up the steam accordingly. The one thing I notice going into my second listen of the CD is that the band has “darkened” the sound a bit, which is an absolute plus! Granted, there isn't a single, solitary bad note in the band's entire catalog (in my humble opinion, that is), but the overall feel of this release is just a somewhat more malevolent one throughout.

Purportedly comprised of song ideas from guitarist Chuck Keller's post-Order From Chaos outfit, Vulpecula, it's no wonder the music herein is much more 'black' in style and tone. Usually when a band shifts from an established “style” of music, however slight or encompassing, the results tend to be disastrous, but Ares Kingdom doesn't allow for such trivialities, bucking the set patterns and set precedents. These reworked tracks are nestled perfectly under the mighty Ares banner, and this is the incredible result.

The opening track, “The Hydra Void,” begins rather innocuously, with the seemingly standard foreboding soundscape of an evil sort of drone to set the stage; it doesn't overstay its welcome and kicks right into the track, leveling the battlefield accordingly with sheer thrashing-death metal that's ever-so-slightly dipped in black metal ambiance. I will also say that while I love the lyrical prowess on each Ares Kingdom release, the bar was raised even higher here, with an almost epic storytelling vibe throughout. The standout for this for me was “Iconologia,” which just creates wild images of darkness and emblematic fantasy. The base definition of iconologia, in short, is a book of emblems from the 16th and 17th century. Do yourself a favor and seek out the full definition, then revisit this track for the full experience of greatness. From that track I go right into my second favorite on the CD, “Tales Chimera Est,” a tribal-sounding song that cascades harshly into a galloping fury describing a beast of unnatural essence and delineation. When I say from start to finish this album has it all, it literally and beautifully does. Not at any point do you feel a need to skip tracks or divert your valuable attention from the majesty provided here. Every track is a valuable experience.

By the Light of Their Destruction manages to capture a malignant vibe of trepidation and wonder within the musical confines of 37-minutes that never relents and doesn't rest on any laurels. From start to finish, you are treated to a fast-paced jaunt through the dark recesses of a fantastical entity that can't be found in just any recording. Ares Kingdom always manages to fill the void when you feel yourself lacking in some quality musical diversion from life's perils and tribulations – it's the one constant they provide unashamedly.