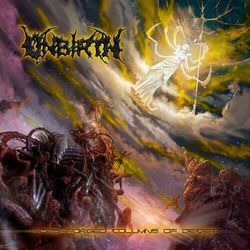 It’s not very often that I come across a death metal release which really catches me off guard and surprises me, but a random night of Spotify browsing led me to Unbirth, and after “Tumults of Collective Anguishes” was finished, the album was already ordered.

Don’t know what’s going on in Italy, but these guys are starting to pump out some incredible death metal lately. These guys don’t mess around, the entire album is a lesson in pain and brutality, but also technicality and tastefulness. It’s a bizarre mix, and at times reminds me of Internal Suffering, which is not a bad thing.

Unbirth take the insanity even further though - some of the riffs on this album are just mind bending. Fast as fuck, intricate, heavy, dissonant - you have it all, coming at you at 500 mph. When the album opens with a sample from an old US nuclear training tape, advising you that in a state of nuclear emergency, you should well, duck and cover. And this album is pretty fucking nuclear if you ask me. I’ll never forget the first time I heard “Tumults of Collective Anguishes” - I was sitting there with my headphones taking it all in. Near the end of the track, it gets louder. And louder. And even louder - the band literally turns up the volume on their own fucking record. I just sat there, puzzled, wondering what the fuck had just happened.

Hook, line and sinker. That’s how you do it fellas.

After that, I was pretty much hooked. These guys had gotten me, and just after one song. That was sure damn easy.

The rest of the album is no slacker, either. The band continuously pummel you with extremely well-crafted riffs and songs. These guys also make really good use of dynamics and arrangements, and they know when to step on the gas, and when to ease off. They don’t ease off much, and when they do, it’s full on grind mode. But where Unbirth really excel is when they just floor it - take the title track, “Fleshforged Columns of Deceit” - it builds up in such spectacular fashion that when they climax comes it’s nothing short of amazing. For those of you wondering what I’m talking about, it’s the section at 2:37 - and it absolutely and completely explodes 2:52. See, that’s how it’s done. That’s proper tension and release, and this album is full of creative and well-rounded song writing such as this.

The vocals are what you would expect, nothing terribly new to be heard here. That said, I have absolutely zero complaints with them, as Michele Sassano does a great job. The drumming is also top notch, providing creative patterns that mesh well with the chaos. And while speaking on chaos, the album isn’t actually all that complicated. This brings me back to the arrangements, which are done very well. Though each song may sound complicated at first, they are all actually broken down into individual and distinct sections, so it’s not just a meaningless mesh of notes. Drummer Mirko does a fine job behind the kit. Again, nothing to complain about. Guitarists Emanuele Ottanti and Alberto Baroni are the highlights though, throwing in a dazzling mix of riffs that are both quite old school, yet with a nice modern punch and feel to them. What they’ve done here is pretty great, and like I said previously, reminds me of the tension and chaos of Internal Suffering. But these have been influenced by a ton of bands - you can hear the Origin in there, you can hear the Morbid Angel creeping up on you from time to time. But it’s ever so faint, not something that would ever grab your attention as a “clone” band.

Production and overall mix are just fine as well, bringing enough clarity along with the punch this type of music requires in order to be effective. The sound retains its modern feel as well as some of the old school feel from the early 90’s.

Very satisfying release which surprised me. Not an easy feat when you consider the sheer number of bands on the scene right now playing this style. But Unbirth lay most of them to waste. Not to be missed if you’re a fan of the genre.