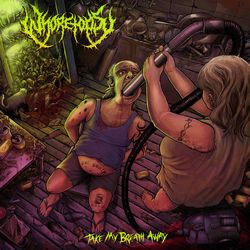 Alright, this is another one I have been looking forward to for some time now. I first stumbled on these guys around two years ago by accident, and I’ve been hooked ever since. While this genre may seem unintentionally silly at times, Whoretopsy takes it several steps further and intentionally don’t take themselves - or anyone else - seriously at all.

Anyone familiar with this band will know that their previous album, 2015’s Never Tear Us Apart was quite good, with interesting and hilarious themes. Whoretopsy step up to the plate once again to show what they have been cooking up over the course of the past three years. And I’m happy to report that the boys from down under still deliver the goods. It’s what you would expect from Whoretopsy at this point - hilarious stories mixed with crushing death metal - and that is not a bad thing. I usually steer clearly away from slam bands because they tend to focus more on the slams than the actual music, but thankfully Whoretopsy aren’t one of those bands. They have good compositional skills, and the musicians themselves are pretty extraordinary too, so these guys know what they are doing. When a slam comes, it comes for a reason, and it’s usually glorious.

Which makes the lyrics and stories on this album even funnier. Because behind all the wacky stuff found in the lyrics, they are backed up by an extremely talented band - drummer Jake drives the album in quite interesting ways and manages to capture your attention more than just a few times. I’ve been a fan of his work for a few years now - overall just a very solid drummer. Guitarists Matt and Luke put in their usual great performances as well, delivering a variety of tasteful and technical riffs to the fold. A good number of which are bouncy but not in a bad way at all. For pretty much the entire duration of the album, you can easily move your head to the solid grooves laid throughout the carnage. Bassist Lachlan provides a solid backbone, and the new vocalist Zac does quite a fine job as well. Whoretopsy have always had great, disgusting vocals, and this album is no different. I don’t think anyone will be let down by the vocals on this album. And if you don’t like this type of vocals, then I honestly don’t know why you’re reading a Whoretopsy review in the first place.

One thing I have to mention is the addition of guitar solos. Not to say that they were never present before, but here they are more prominent, which I think is a good thing. It sucks when clearly accomplished musicians completely ignore guitar solos in this type of music, and it’s good to hear Matt and Luke bringing ‘em back. There are some really interesting and well written solo sections on this album, such as the sections in “Fallout Boy” and “Waltzing Matilda” - they’re both very well written and also fit the songs well. It’s all quite well thought out which I can always appreciate, and it brings a new dynamic to the Whoretopsy sound which I think works well.

The production, sound and mix on this release is damn near perfect - it must be so easy to fuck up a mixing job on an album as intricate as this. But everything can be heard loud and clear, no instrument really dominates the other, except maybe for the bass guitar, which seems to be the bane of most death metal bands, mix wise. While it is certainly there, you have to strain to hear it through the incredible crunch of the guitars and the thundering of the drums. That said though, this album sounds pretty great, from everything to huge monitors to your daily in ears. It definitely has the punch and clarity expected from a band like this.

If you’re looking for a change of pace and some hilarious lyrics backed by some incredibly heavy song writing, then you can’t really go wrong with Whoretopsy.

And come on - that album cover is about as good as it gets.