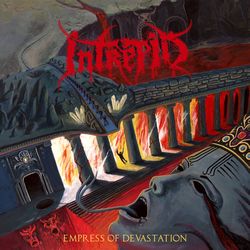 Months ago, I was approached by Intrepid guitarist Simo to check out their first EP, Empress of Devastation - and because I don’t get many, or should I say, any review requests from Estonia, I of course accepted to give this young band a listen.

It’s an exciting thing, to listen to such a new band that isn’t signed to any labels or doesn’t have any previous LP’s or EP’s. This is their very first effort. Their baby steps.

These aren’t baby steps at all though, as these guys certainly know what they are doing. In fact, these steps are quite hard, and quite solid. As soon as the EP really starts with “Inside the Wall”, you get that sense of old Obituary. Now I don’t know about you guys, but I really miss that vibe - those dirty, sludgy riffs, with those old school vocals. Vocalist Kevin Marks sounds absolutely nothing like John Tardy, but the vibe is there. A lot of it has to do with how the songs carry themselves, but a lot of it also has to do with the drumming - there are no blast beats here. It’s completely old school death metal drumming and wouldn’t sound out of place at all on the earlier Death and Cannibal Corpse albums.

Speaking of old school death metal, I’m happy to report that there is no Morbid Angel worship here - something which I am so sick of I could rant about it for several weeks. No, Intrepid take a more straight forward and brutal attack, but still retain enough finesse so it’s not totally caveman, either. First of all, guitarist Simo does a great job with some no-nonsense guitar work. He is also creative with the note selection and also the arrangement of the songs and their sections. While it sounds primitive compared to say, Cattle Decapitation, well that’s the whole point. Intrepid don’t just blaze through ten sections and call it a song, you can tell they’ve thought about the arrangements for quite a while. Each guitar break, each bass break is carefully crafted, so the end result is that it hits with a lot more impact. It’s like being stomped on slowly, rather than being kicked really fast.

The vocals as I mentioned above are really well fitting for this sound, I don’t think they could be any better to be honest. The rhythm made up of Kalli Talonpoika on bass and Madis Kaljurand on drums is really solid, as solid as you would expect. I appreciate how the bass can really be heard in the mix, and also that there are no blast beats. The mix I also really appreciate as it literally sounds like it was recorded in the 80’s. However, there’s one sound on here, especially on “Empress of Devastation” during the 4:26 mark, which I have no idea what it belongs to. It’s a weird frequency in the mix which I can’t quite put my finger on. Is that the guitar pick? If so, that’s one fucking loud guitar pick. It literally squeaks through the entire section. But nevertheless, the mixing job on this EP is quite great. Everything can be heard loudly and clearly, which is the most important thing.

Overall this is an EP I really enjoy and displays, at least for me, a lot of good things to come. I hope the guys Intrepid stick to it because this is not the type of death metal typically released anymore. Everyone is so focused on speed and technique that I really do miss bands like Solstice and early Malevolent Creation. For those who like the old school death metal vibe and style, give this a spin, it will absolutely not let you down.