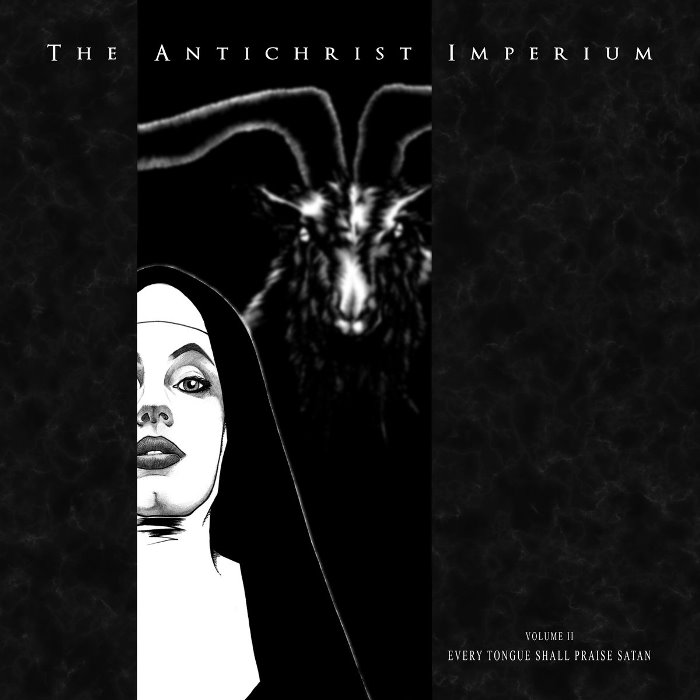 For some people, Antichrist Imperium’s first album may have very well gone unnoticed. I never quite understood this, as the band consists of very respectable musicians. We have members from Akercocke, Mithras, The Berzerker and My Dying Bride. Their first album (simply entitled The Antichrist Imperium) was a whirlwind of masterful musicianship and songwriting. And there’s something about this band that just has this vibe of evil that I absolutely adore and is unfortunately missing in a lot of today’s metal.

That’s not the case with The Antichrist Imperium. They bring a feel and vibe which I think is sorely missed these days. That sense of darkness, despair, and foreboding evil. It lurks in every corner, it’s there in every shadow. It’s always there, and it’s one of the main things that drives me to these guys. So, I was quite excited to hear what their second offering would sound like.

Thankfully, it’s not a drastic change from their first, which quite honestly is pretty perfect and doesn’t need to be tweaked much. You see, this is a seasoned band. Despite this being their second album, the band members themselves have been around for a long, long time, and each are absolute professionals, and that really shines through on this album. The level of songwriting and musicianship is through the roof. Each section of each song is thought out with the most meticulous care and dare I say, love. They are crafted expertly, everything from the extremely fast sections, to the clean sections, to the keyboards - everything. Everything is done with the utmost care and love of the craft.

With a name like The Antichrist Imperium, these guys have basically forsaken all forms of commercial success since their inception. They are here for the art, and it shows so clearly throughout this entire experience.

“The Dreadful Hosanna” Is the first thing you’ll hear, and if you’re familiar with their previous album, you’ll feel right at home. It has everything you loved about Akercocke - tasteful guitar lines, their sense of groove and just the way the song flows so easily, and the expert vocals of Samuel Loynes. Additional vocals and bass are provided by Sam Bean, who also does - surprise surprise - a fantastic job on both fronts. A prime example would be a particular passage in “Draw Down the Moon” which sounds spectacularly evil, and not from this world.

Matt Wilcock puts in quite an astonishing performance. The thing that makes the guitar playing on this album so great is that Matt knows exactly where to cut through, and where to back down, to support the current ongoing passage and rest of the band. Because this album is quite busy in the instrumentation, it’s especially important the instruments play off of each other well and support the ongoing passages in the best way possible.

Another thing that makes this album great is the mixing and mastering. Each instrument can be heard with proper definition and clarity, which on an album like this, is especially important. Sure, it’s heavy and it’s fast, but it’s also not your standard metal album with just guitars, drums and bass cranked up to ten. There is a whole lot more going on in here which demands clarity and punch. The drums sound like actual drums and not this overly triggered nonsense, the bass is nice and clear, and the guitars have just enough bite to where they are not obnoxious or overkill.

I’m not going to go over specific tracks or highlights, as there are so many sections on these songs that picking them out one by one would be an exercise in futility, and it’s just not needed. There are many captivating moments on here - the album is like peaks and valleys of emotions, moods and soundscapes. And I absolutely just love and admire the fact that Akercocke are still around and that is project is done just for the sheer love of music. Yes, they share a lot of similarities, but if I had to make the hard choice of just picking one, I think I’d stay right here, with The Antichrist Imperium.

By all rights, this is superb.