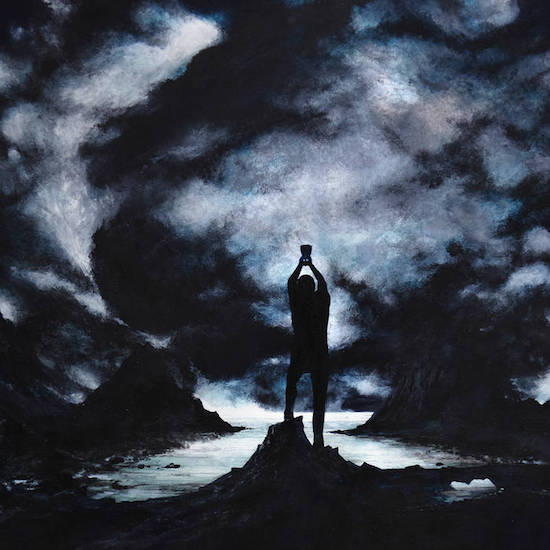 Misƥyrming hail from Iceland. It’s a fascinating island with its own, rough culture, but to be honest, its black metal bands are often challenging. They love to wallow in dissonant sounds. This approach lends them a pretty unique note, but I would prefer a less pronounced affinity for bulky experiments. Misƥyrming, good news, do not celebrate this more or less typical Icelandic art. The quartet finds its pleasure in more structured, comprehensible song patterns. Don't worry, I do not speak about conventional verse-chorus-verse schemes. The songs are excitingly designed, but the guitar lines are more song-friendly than some of their national competitors.

The first three tracks hit the bull’s eye. In particular “Með svipur á lofti” captivates with its successful narrative arcs. But all songs of the opening trio deliver adventurous sequences, variable designs and, in alignment with the wonderful artwork, a lot of depth and style. (Indeed, the cover precisely reflects the music, great choice!) Every listener will realize quickly that Algleymi offers a broad portfolio of emotions, inclusive some almost Viking metal compatible parts in the third track. Too bad that the tired instrumental at the end of the A side adds absolutely no value to the vinyl. Powerless and cautious, it staggers the first half of the album to an ending not worthy of it.

But this is the only low blow the listener has to cope with. The B side presents itself more homogeneous. Okay, I cannot say that songs like ”Og er haustið líður undir lok” are overflowing with black metal atmosphere. Some parts rather sound like down-to-earth dark metal with a patriotic, northern touch. But there is always a sinister spirituality to feel and the comparatively muffled yet appropriate sound sets a good frame for the musical content. The vocals must also be mentioned in this context. They are deep, aggressive and terrifying – more or less, at least for romantic newcomers in the metal community. At any rate, the lead vocalist seems to put his whole personality into his performance and this is always a factor that makes the difference between “okay” and “very good”. Better still, the entire horde gives the impression that it loves what it does and thus the tight interplay is definitely not a product of chance.

The gatefold album includes a kind of lyric book with the original texts and the English translations. This is the icing on the cake of the stylish package. Nevertheless, the music is the crucial factor, but if you like profound, mid-harsh black metal, tradition-conscious on the one hand, but with an individual touch on the other hand, you cannot go wrong with this release from 2019. All of the seven regular songs have a lot to say and even the closer makes a strong and surprising statement due to its combination of powerful and almost meditative sections. It’s always nice to get one of the highlights at the end of an album, right? I'm almost ashamed that I'm lowering the average with my rating....

After 4 years and several trials, acclaimed Icelandic black metal band Misþyrming are back with their long awaited sophomore album Algleymi and it is in my humble opinion another triumph for the band.

The band first took the spotlight with their masterpiece Söngvar elds og óreiðu and then released an excellent song “Hof”. That album and single showed the world of metal what Misþyrming were capable of and in this new album they continue to take black metal into bolder new directions. The first thing of note here is how the band has become a single working unit, a true band. I wrote in my review of their debut how that album was founder D.G.’s unique vision, and indeed that album was done almost entirely by him with help from drummer H.R.H but here all the member of the band made this album and while this is still D.G.’s vision, the rest of his band mates have helped him to fully crystalize their new sound.

The music here is widely different from what we heard on Söngvar..., the band has developed their sound from the raw and chaotic sound of their first record for a much more complex, controlled and even refined style, this is by no means a negative, this is an evolution from what they did before, the songs are just as fast and aggressive but there’s now an added layer of dark atmospheres and the guitar work takes more prominence in the form of melodies and riffing that the band hadn’t really showed before. D.G. and second guitarist T.Í. show off their chops throughout the album, the standout tracks where their guitar work is the main event are the opening track "Orgia" and the second to last track "Alsæla" where the tremolo picking is at its strongest. However I stand by my statement that all the band is what makes this record great, while the guitar work is noteworthy all of the band works together in unison, each member works at 110% and all the music comes together in all the right ways.

The soundscape created here is, as I said, a much different feel than their previous work. The stronger emphasis on the atmosphere is punctuated by the use of keyboards by D.G. they add that extra detail to the music, and as with their previous record the band is not afraid to switch things around with an instrumental dark ambient track, however unlike their previous album, instead of a menacing and ominous interlude the track "Hælið" is a much more morose and contemplative track. In a recent interview D.G. described the album as being bound by the theme of ecstasy and that the last 2 songs encompass the album as a whole both musically and thematically and I agree with that description, the album is both epic and morose, proud and loathsome, it goes through the whole gamut of dark and opulent, it’s a complete step forward for the band and has all the right pieces for Misþyrming to become one of the greatest black metal bands of all time with the only mild observation I can make is the stark contrast between this album and its predecessor, both albums are excellent but in notable different ways and for some people that will be a hurdle to overcome but I suggest that people give this album a chance, because it as I said proves why Misþyrming deserves the credit they’ve gotten.