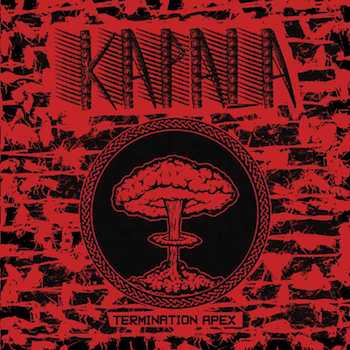 Yet another Indian extreme metal sect takes a giant dump on the weaklings that have come to be known as mankind. And yes, Dunkelheit Produktionen is responsible for approving this inhumane attack. More and more war metal is coming from the far eastern side of the world as of late and it’s a great thing. There's something special about the way they approach the moniker that makes me keen to listen every-time, I think it’s the rich Hindu culture that appeals to me especially when entwined with the metal. Having already manufactured warheads such as Genocide Shrines, Tetragrammacide and Aparthiva Raktadhara the eastern doomsday arsenal is upgraded with the installation of more anti-human mechanisms. This new addition to the ever-growing artillery is known as Kapala. Imagine a bass heavy distortion drowned version of war metal, played in moderate and blazing speeds and never sacrificing a moment of brutality even on the intro and outro. Termination Apex sounds like glass falling from the sky. Definitely not for a newbie, and specifically not intended to meet the musical lowness of the mainstream. This is for the underground by the underground, a trve cvlt to the bone recording.

No catchy hooks, melodies, or clean singing, all you get here is a whirlwind of anger and hatred. This is raw black/death metal all the way from the mysterious and shores of India. That region of metal-artist has slowly been working their way up the ranks in diverse styles. Here on Kapala’s second EP, Termination Apex, they strive to meet the peak of unadulterated mayhem. I can hear some power electronics feeding distorted guitars with more dissonance, thus smearing the record with a scarred skin of cacophony. To an extent this reminds me of Goatvermin’s "Détruire" hence the turbulent veneer of Termination Apex. Barbaric in every sense, from the chaotic and chilling introduction followed by a turbulent array of riffs, drums and vocals featured on “Martial Dominance” and so forth. There’s no breathing space for anything else on this record, candid like a slug to the face from a baseball bat, Termination Apex is a wreck-fest for those baptized by the likes of Intolitarian, Amputator, Tetragrammacide, Revenge, etc.

With the production so racketing/noisy, and the throats tearing through your speakers, Termination Apex is not the record I can recommend for you to play loudly, especially if you have my kind of neighbors. The kind that can stand to listen to a full day of the brain-dead shite playing on the radio; second thought, those are precisely the kind of neighbors this was designed for, give’em hell! I’m quite impressed with the vocals, sometimes they’re a mixture of death growls and loud bursts of black metal snarls, channeling a contempt for humanity through veins of ire. You’re going to enjoy every song, perhaps ‘song’ is the wrong word, because they’re definitely not, sessions seem more applicable to describe the riot of sounds assaulting your ear canals. “Vomit the Phosperous” and the outro “Unto Ash” is what this vile offering sets out to accomplish sonically; unnerving annoyance. Termination Apex is a nuisance of its own, its pure bellicosity for the listener/s to drown in; those familiar with the likes of aforementioned bands will appreciate every minute of this.