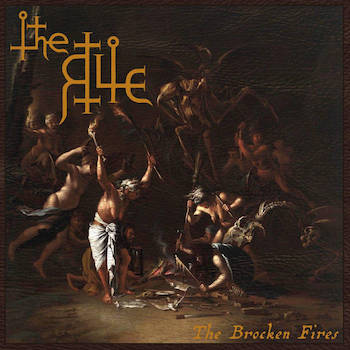 The Rite is a rather new international band founded in 2017 by musicians located both in Italy and in Denmark. It’s increasingly becoming more common to see bands with members whose locations are quite far, thanks to internet and the new recording equipment, which make possible to compose and record music even if the members don´t spend a single second together. I don´t know if this is the case, but it´s clear that the current technologies made easier for P.Guts, who plays the drums, A.th who plays the guitars, bass and keys, and Ustumallagam, who is the vocalist, to create The Rite. It didn´t take too much time until they could release their first effort entitled The Brocken Fires, with the ex-member Gabriel on guitars, as all the members were already experienced musicians with several previous projects. Almost all of them were closely related to extreme metal subgenres as black metal or doom metal.

Unsurprisingly, The Rite is a band which mixes black and doom metal and whose main influences are classic bands like Celtic Frost, Samael or Goatlord, among the others. As previously mentioned, The Rite released The Brocken Fires only one year after the band's inception and though initially it was only released as a cassette, this debut EP has caught Iron Bonehead Productions attention which has decided to re-release it on CD and vinyl. Thanks to this The Brocken Fires is gaining a bigger attention through the underground scene. This initial effort consists in a short intro called "Prayer to Satan", three new tracks and a Goatlord cover entitled "Acid Orgy". All the tracks deliver a solid mix of black metal with heavy doom metal influences, especially in the somber tone of the compositions and the generally slower pace in comparison to an archetypal black metal song. This gives a greater room to the band to create truly heavyweight riffs that are the indisputable strongest point of this EP. The first track entitled "A Pact With Hell" is a fine example of this description, delivering powerful riffs which remind me in a few moments of Celtic Frost and accompanied by solidly executed vocals by Ustumallagam. His vicious and strong voice is the perfect companion to the black/doom esque riffs, which at times can sound slightly more melodic, this is in my opinion, a nice point which enriches the composition and adds variety to this song. Another strong point is that the band tries to escape from creating songs with a monotonous pace and at times introduces fast sections, which are an interesting add. The aforementioned song and the last song created by the band, "Heed The Devil's Call" have a quite similar structure and though both are solid efforts, is the second song, the homonymous "The Brocken Fires", which is in my humble opinion the highlight of this EP. Structurally, it’s the most varied one with slow, mid and also fast sections, the riffs are excellently composed and delivered with powerful notes, but not exempt from inspired melodies. Apart from that the band introduces some organs, which enhance the bleak atmosphere of the track giving the extra point that makes the song even better.

In conclusion, The Brocken Fires is a pretty solid debut by The Rite. Though it doesn't hit the ground with something especially original, the ideas behind these compositions are pretty well executed and make this EP a work which deserves a listen.

The Rite are new band which shares members form Denmark and Italy. Their brand of steel on this 2018 debut The Brocken Fires can be described as a blend of black and doom metal. They bring their idea of hell and occultism on a palate of chilling doom that see riffs play an effective role along with the backing keyboards in adding despair to the evil vocals.

Most of what’s served here is decent for a first entry. There are some things that could have been done better but as stated this is just the beginning from a band merely testing the waters before putting their best effort forth in committing to the dive. 'A Pact with Hell' is for me the best entry and gives a convincing idea of the potential The Rite's music has. Their steadily paced lines of doom held captive by overcast icy keyboards, fairly discernible vocals and a worthwhile production makes for a good listen that could see a few more rounds on the turntable depending on your taste.

For me the material is a bit safe though there were opportunities presented to expand the music and break away from predictability. As highlighted before 'A Pact with Hell' is the favorite here because of its growing climax and sudden changes in pace that eventually overflow into a burst of blast beats. The element of surprise is something I value greatly in metal so hearing this was more than welcome by my preferences. More of this was used for the following track 'The Brocken Fires', that even-though was good to hear, was not as intense as the previous. However, the slower drive of 'The Brocken Fires' gave a lasting performance resulting from very catchy guitar hooks and leads. In spite of lacking the intensity and catch of its predecessor, it showed to be a good follow-up.

The Brocken Fires is definitely testing grounds used to develop a better entry form The Rite sometime; still worth a listen.