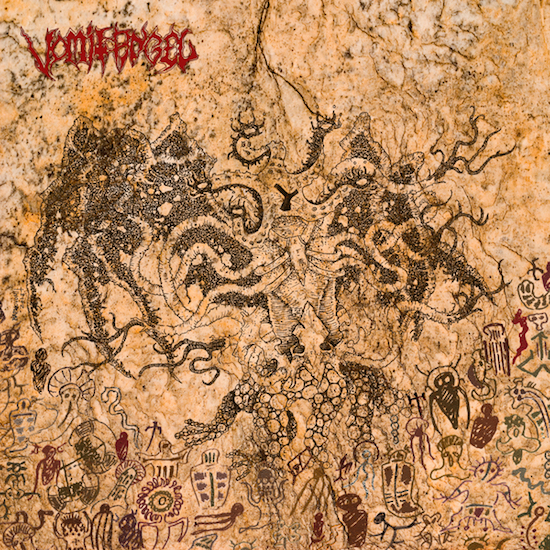 Get ready for 28 minutes of despicable black/death/thrash war metal grindcore. This mutating fungus of disturbance by Vomit Angel in the form of Imprint of Extinction loosens the screws of the filth tank to let the ugly gush out and onto the war metal territory. This is the first time ever hearing what Vomit Angel are about and to be honest it’s not bad at all (musically). I tend to stand clear of 11/2 length tracks as they usually are about just fucking around and shit with rarely any amount of seriousness existing in the music. I decided to give this one a chance primarily based on the fact Vomit Angel’s latest march in filth would be released through Iron Bonehead Productions; so, if they saw something redeemable in the music, samples of regurgitation and defecation, then perhaps I would too; so why the hell not give the material a listen. After a few spins, turns out the music is not too shabby at all, and even has some rather amusing elements present.

Firstly, the production garnered positive feedback during the time spent, not overly ugly nor clean, secondly, within the recordings lay a jesting appeal that see Vomit Angel provoke the thoughts of the listener by doing little but meaningful and suggestive actions. The music is straightforward black/death war metal drumming with transitions towards punk metal and thrash metal. The track most appealing to me is ‘U.S.G’, it’s the one song that has less in common with the others when addressing the instrumentation; plus, its leading riff is similar to Goatpenis’ ‘Pleasant Atrocities March’, one of my favorite tracks off "Anesthetic Vapor". The incorporation of the cowbell is the most amusing and surprising element on Imprint of Extinction as it’s not traditionally apart of the war metal theme. Hearing it play an opening role on songs such as ‘Concussion’, ‘Hobo in the Woods’ and the ridiculously short ‘Hollow Earth’ made this effort all the more amusing. The amusement doesn't end there as a drunk and drowsy vocal show undermines the aggressive throats on ‘Vestyfen Classic’.

Four of the songs featured on Vomit Angel’s Imprint of Extinction can be heard on a tape put out earlier in the year titled Ceremonium Promo 2019. I have not hard it but I am assuming those tracks were re-recorded for this occasion.

Lyrically I don't know what it is about, and the vocals are not clear enough to be deciphered, however judging from the names of the songs Imprint of Extinction is a mixture of menace and mockery; it makes clear that Vomit Angel don’t take the genre too seriously.