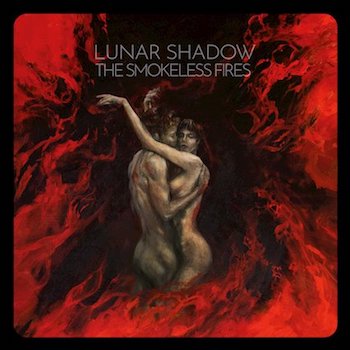 Germany’s Lunar Shadow have the right combination of sounds to be interesting on this their second full-length The Smokeless Fires. Their style mixes different styles of metal quite effectively. It has a lot of galloping riffs that are similar to Iron Maiden, but then some other sections that recall other bands as well. The result is a vibrant and colorful album that constantly shifts and changes around every corner.

From the first couple of songs alone we can detect a certain amount of bravado that places the album mostly in the traditional metal genre, but the album diverges as well into other genres like folk. The music is smooth and emotive, bringing the best elements of the heavy metal genre to the forefront. The band goes through the typical musings of a heavy metal act even though they add other material to their music. Though accessible, there is enough of an underground flavor to make this a very worthwhile listen. The vocals on the disc are also very nice and elevate the music above other contenders easily.  The guitars are heroic and varied enough to nicely fit into whatever mood the band has in mind. Drums complement the rest of the material as well. The entirety of the instrumental performances is convincing and makes for a great traditional album.

There really isn’t much to fault with this recording. It does its best at making the traditional genre accessible to a variety of metal listeners. This is one of the best traditional metal albums I’ve heard since Iron Maiden’s last album and carries forth a positive vibe for all to behold. Fans of the genre should get this album without a doubt. Also, fans of interestingly blended genres should find a lot to like with this as well. It combines sounds in a compelling and effective manner.