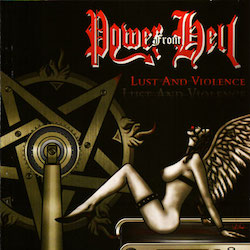 Does the gagged girl on the cover love bondage? Does her crude outfit appeal to the lowest instincts of the listeners? And is Lust and Violence an album which is worth to discover? Let's try to clarify these very important questions.

First of all, nobody needs a university degree to understand the fourth full-length of Power from Hell. The simple designs of the songs are easily comprehensible. The material spreads dark vibrations while relying on conventional patterns. Motörhead meets Venom in a misty valley where everything sounds dull. In other words, the grounded sound does not present subtle nuances and, you guessed it, the music does not ask for this feature. The muffled mix seems to be aligned with the barely audible screams of the gagged lady. Given this situation, one can love or hate the sound of this album, but there is not much in between. The same goes for bondage games, I assume, so choose your side or ask your girlfriend which side she wants you to choose - just keep an eye on the gag. It has to be in your hand or in her mouth. (Forgive me this macho-like side note.)

The lyrics also mirror the slightly sick fantasies of Sodomic, who was almost responsible for the entire recording of the album. "I will f**k p**sy and feel free" and further elegant lines should not be taken seriously. They are just stupid or adolescent at best. But as a non-native speaker, it is no big problem for me to ignore the lyrical nonsense. This makes it easy to focus on the music which is more much interesting, even though Power from Hell do not use many riffs per song. Nevertheless, intelligently titled pieces like "Headbanger... the Ripper" strike with clear contours, a good drive and a nearly catchy chorus without losing their underground aroma. Frankly speaking, I could use exactly the same description for "The True Metal" and some more numbers. On the one hand, this is pretty predictable and almost formulaic, on the other hand it gets obvious that Sodomic has found his way. He acts authentically, and it seems as if the songs come from his heart (hopefully I am allowed to use such a more or less romantic term in this f**k-all-p**sies-review).

The unusual closer wants to be the darkest blues song in the history of sunny Brazil - but with the exception of this piece, the listener is well advised to expect no surprises. The pretty sinister opener "Black Angel" sets the course and the further tracks follow its direction more or less strictly. Some song titles border on parody or even go one step further ("The Metal Is Sick but Never Die"). I admit that I was not aware of this finding so far. But I know that the target group of albums such as the here presented is pretty small, because friends of innovation, complexity, individuality or neatness will avoid this kind of music at any cost. But supporters of filthy black thrash with classic rock influences won't reject Lust and Violence and this is the main thing. So here are my answers to the questions at the beginning: In spite of my intensive research, I don't know whether the girl on the cover loves her treatment, but the artwork and the lyrics prove evidence that Sodomic likes to play with our animal instincts. Be that as it may, I recommend the output to every fan of the sub-genre. Don't expect an underrated jewel, but a good album.