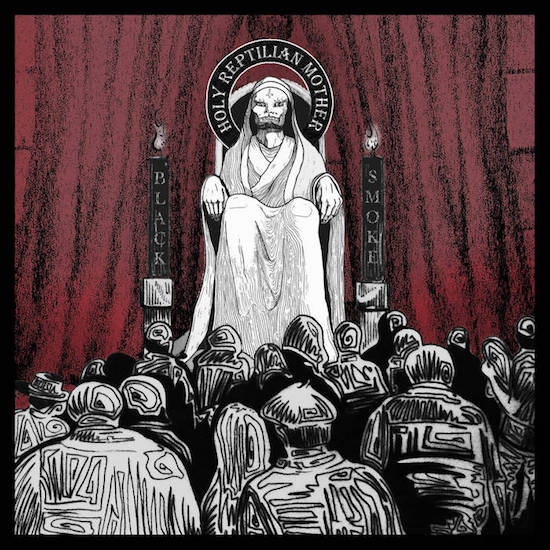 Polish sludge metal sect Black Smoke are a new bunch to intoxicate the already drugged up scene. Usually when I see the sludge metal tag next to a band’s name, I assume they’re from the States, and after listening to Black Smoke’s debut full length-record, Holy Reptilian Mother, I was shocked at the least to find out they are a Polish group. The reason for this generic small-minded approach I take when it comes to sludge is due to the fact I’m not enthusiastic at all about the genre and most of the bands I’m familiar with are from the United States of America. What also pulled my perspective and initial conceptions of the band is that Black Smoke, on Holy Reptilian Mother, have a very heavy southern sludge/stoner metal sound, something I was not prepared to hear coming from a Polish band. Another element worth mentioning is though the material is listenable in terms of its production not (excluding the music), Black Smoke makes Holy Reptilian Mother sound dirty as a result of their vocal approach.  By means of death metal growls, abrasive, deranged, drugged-up sounding screams and use of extraterrestrial electronic sounds and even a saxophone on Holy Reptilian Mother, they hatch a crepuscular, eerie body of music. This striking sound helps to grasp an idea of the themes discussed here. With regards to their antecedent work on their debut demo, Fuck Society, a clearer idea is given as to what message/s Black Smoke wish to transmit.

The early moments of Holy Reptilian Mother took some time adjusting to, not the rawness of the approach rather the outlook of the music as a whole. And though the mixture of abashed yelling and deep guttural growling were delighting, I was worried for the following songs to come as I was yet to find a purposeful concurring flow. That all changed after “Iron Lung”, with “Stormtripper, Shroomtripper” being the first entry to divulge song structures that would exude climax. At this point the material began to gel, in so creating a reintroduction of sorts to Holy Reptilian Mother. With “Ethanol” following the same path, Holy Reptilian Mother grew to greater strength in consistency, whereby songs would have all those diverse elements like the psychedelic electronic samples, stoner doom tuned guitars and a mashup of contrasting vocals and still keep a keen hand in ensuring it possessed adhesive continuance. Every entry henceforth got better, especially with catchier power-chord driven grooves coming to fruition on “Acid is Not a Cheap Wine” and “Release the Cocken”. By the time those tracks have passed you don’t even realize that you’re almost through listening to a 41-minute sludge/stoner doom record. Keeping in mind it’s easy to feel tired of pedal distortion, but Black Smoke keeps interest by lowering, increasing and decreasing the pitch of their music either to facilitate ambient sounds or add a mellow contrast to the harshness of the vocals and instrumentation in which the self-titled track is a good example of.

I'm impressed to say the least, I was not expecting such a pleasing degree of sludge/stoner doom metal. Give Holy Reptilian Mother a spin, it will take a while before the acid kicks-in, but it is worth the wait. Black Smoke has delivered top-tier hallucinogens from Poland.