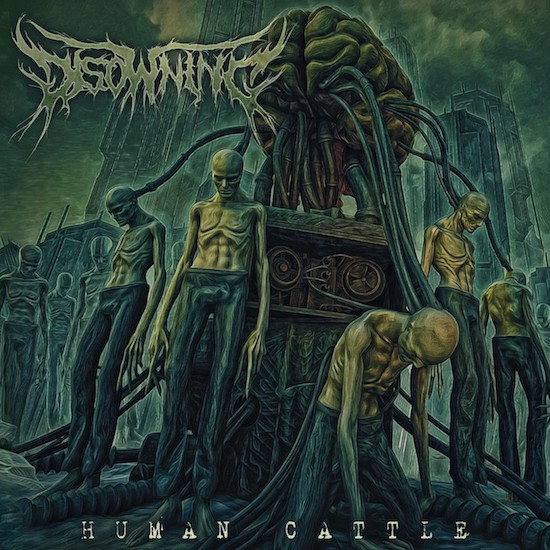 Buy on: Bandcamp
Type: Full-Length
Release Date: July 12th, 2019
Label: XenoKorp
Genre: Death
1 Ghost Area
2 Battle Of Neverness
3 Another Piece In My Collection
4 Intoxicated By This Illusion
5 Suffocated By My Walls
6 The Servants Of Chaos
7 Inner Emptiness
8 Alone On This Dark Path
9 Human Cattle
10 The Storm Before The Storm
MetalBite on YouTube

If you like well-produced death metal that does not get in the way of the music then this debut full length album from the international (Canada, France) band Disowning is one you won’t regret picking up ASAP. Limited to only 500 copies on XenoKorp, you will find yourself to be a very miserable person once this gets sold out and you don’t have it. From what I’ve gathered the front-man is also an active member in some other underground bands ranging among black metal, brutal death metal and deathcore; thus, the experience of his vocal ability shows on Human Cattle along with the rest of the instrumentation that in turn solidify the sound Disowning appeared to be aiming for. These individuals have a clear understanding of what makes a good death metal record and through Human Cattle they make it abundantly clear that they are gunning for gold. How’s it? It slays!!! From the drumming to the guitar riffs to the vocals, and just the entire coordination of Human Cattle utters excellence. With the way the record holds together, it’s almost unbelievable that Disowning is an international band. There’s so much cohesion musically that you would believe the individuals in the band live in houses adjacent to each other. And Sylvain Biguet’s steady hand in mixing, mastering and recording this material is sensational; he diligently captured the most endearing moments of each item, making Human Cattle a special record. Get ready for the soundtrack to the current times we live in, when the dependent, fucking sheep minded are easily programmed and lead to their imminent demise.

Disowning plays death metal that is slightly influenced by the old school Swedish scene mixed with an early 2000s sound. Features lots of tempo shifts, semi-technical exclamations, and beautiful guitar work both in the soloing and leading departments. A progressive feeling is present thanks to the audible bass guitar but does not prove to be distracting as it is introduced to the music in a well-organized way. This record has it all, a sense of atmosphere, aggression, technicality and progression. Human Cattle sets quite a standard to maintain and even challenge the quality of the band’s future releases, if any are to manifest, which one would hope does. Not only is the music and production excellent, the themes discussed, and the artwork share the same air of fascination. I was reluctant to give Human Cattle a chance at first due to so many new releases promising to be this and that, then by the first tune in you can predict exactly where the record will fall face first. Not here on Human Cattle, the musicianship feels unified, all cannons firing different pods of death metal that open up like newly blossoming roses. This effort by Disowning is a keeper and a must have for 2019. I was betting this would be “stock” death metal but was I wrong; instead I got 39 minutes is a lot more than I was expecting.

Same as the case with most albums, it was the artwork that drew me to Human Cattle. Its mid to late 90s aesthetic was just the dressing, but once I was able to go beyond and get to play with the tits, it was a series of delightful sensations set to follow. I heard ‘Ghost Area’ and thought 'ok', then ‘Battle of Neverness’ which turned into 'hmmm' (in a good way). Beginning to enjoy the strip-tease, ‘Intoxicated by this Illusion’ said fuck it, and all the ass and boobs came falling out with no warning. What a blistering performance to say the least, with 'Suffocated by My Walls' living up to the already high bar set on the prior track, this time elevating the song structure to display more groove, technical and progressive elements intertwined with the death metal posture most are familiar with. Having cleared the path with ‘Suffocated by My Walls’, the rest of the tracks only had to walk it. And that they did with much confidence as exhibited with ‘Alone on this Dark Path’ and ‘The Storm Before the Storm’; while still finding something to add along the journey to keep the listener/s attention. Songs are short and to the fucking point, not wandering around aimlessly until they find something to work-with; no, the intentions and means by which they would be achieved were thoroughly thought-out and prepared adding to the completion factor of Human Cattle. The Butcher, Peb, Jérôme, Adrien and Maxime have crafted a record that needs to be heard.