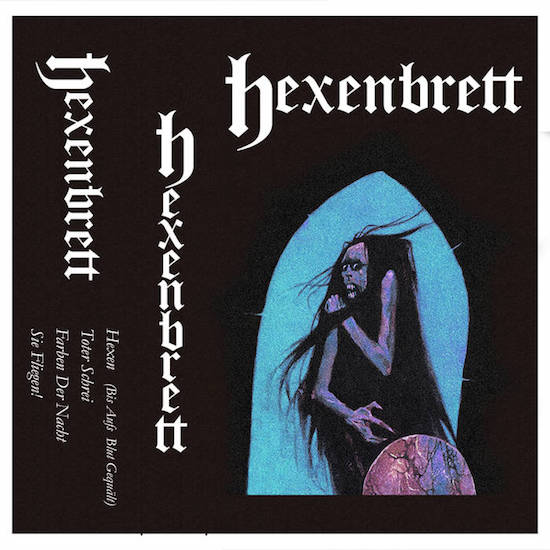 Heavy metal, I know it’s nothing new, has a million faces and Hexenbrett add another pretty strange one. The artwork depicts the brother of Catweazle and the music is as eccentric as this guy. Have a look on M-A at the “Similar Artist” category of the band and you will find names such as Malokarpatan or Master’s Hammer. These bands stand for relatively crude and individual sounds and the same goes for Hexenbrett. This does not mean that the German newcomer sounds like the aforementioned heroes from Czechoslovakia, but they share the same level of individuality. So how can the material of Erste Beschwörung be described?

The eerie four tracks combine occult sounds with a handful of black metal vibes and elements of horror punk also show up. The song structures do not suffer from an unhealthy dose of complexity, but due to tempo shifts and weird moments, it happens enough to get the full attention of the listener. Mostly mid-paced, sometimes explosive, the songs reanimate the ghost of Mercyful Fate and only one part (the ending of the second track with a nerve-shattering “la-la-la-la” vocal performance) is beyond the acceptable range. Speaking of the vocals, the lead singer does not lack charisma and he varies his voice successfully, especially in the comparatively raging “Farben der Nacht”. He is able to convey a menacing insanity and some atmospheric background choirs support him every now and then in an effective manner. By the way, the same applies for the production. It marks another fine example for a technical implementation which fulfils the international standards in terms of professionalism without hiding its dark and spooky core. Indeed, the sound has a diabolic undertone and it ennobles each and every song of the more or less mystic quartet.

From the first sacral tone of the opener until the metallic end of the closer, there is a tinge of magic in the air. In particular the opener leaves its impressive mark in view of the strong, mouldy line of the verse and the impulsive chorus which hauntingly reflects the pain of the tortured witches. The entire track is a prime example for a song where atmosphere and harshness coalesce with each other without losing an ounce of their original strength. Dying Victims Productions has added some extras that should make you order the vinyl – of course only as long as there is a basic interest in horrifying, relatively non-conform metal. Hexenbrett do not reinvent the wheel, but they have given their souls to a rare form of metal, they offer catchy sections like the chorus of “Farben der Nacht” - and who knows? Perhaps one day we will know that Erste Beschwörung was nothing less but the first step of a new born underground attraction. Either way, one thing is already certain: here we have the atmosphere that Ghost will probably never be able to create.

This German project going under the name Hexenbrett plays the kind of metal you would feel more comfortable listening to while in a closet with only candles lit around you when channeling energies from an Ouija board. Take traditional heavy metal and mix it with punk rock and black metal of the 1st and 2nd wave with plenty keyboards. I'm all in, this record has made the nighttime so much more interesting as its usually a period I blast the occult forces within the metal genre; 13th Moon and so forth usually share the shadows, I'd like to add Hexenbrett to the class of cursed souls. I consider this to be one of the best new releases coming from Germany in 2019. Almost skipped over this amongst the piles but happened to have seen it pop on the internet as of late and I just had to hear what the fuss was about.

There's been a bit of an occultic bubble forming within the underworlds of metal but only some have been able to give adoration to the mystical while playing what would appear like trance music to accompany the various occultic references. On Erste Beschwörung Hexenbrett sound like an estate is being put together with the intention of housing or being a site for rituals of all kinds. This record has it all, eerie keyboards, choirs, deranged vocals like being under the direction of a sadistic spirit and classy guitar riffs from the vaults of the early 80s.

From the first to the final spell with the ’Hexen (Bis Aufs Blut Gequält)' being my favorite, you hear a project rising through the ranks of those playing similarly influenced music. For only 18 minutes of music, it hits the bullseye in achieving what it set out to. You hear it all through Erste Beschwörung in the form of doom passages, synthesized choirs, late 70s to 80s styled keyboards and the traditional heavy metal worship along with some gothic punk rock.

If you're into this kind of music then there would be no mistake in picking up Erste Beschwörung; definitely recommend this for those seeking obscure underground metal. Hope there's more to come from Hexenbrett soon; it will be interesting to see what route is taken on the next journey.