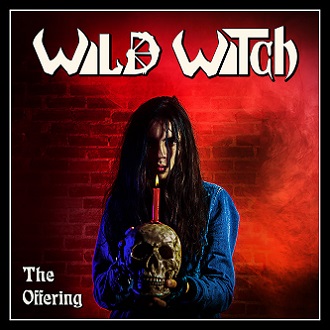 This is fantastic heavy metal, no doubt about it, coming from a land that worships this beast day and night, Brazil. Wild Witch makes great music on their 2017 album The Offering. Loaded with fun leads and solos, the record dwells within the very breath of everything I admire about traditional heavy metal. It’s the kind of record you could put on anytime during the day or evening; personally, I play this kind of material after a long toiling day at work; just laying back and letting the riffs ripple through the speakers. This is the kind of music you would want to actually own on every physical format if possible, given it has such a high replay value, you would most likely even want it digitally if you can't get hold of a physical release.

Kicking off with “Heavy Metal Inferno” you quickly realize you're in for a treat. Down to earth Brazilian accented vocals speak directly to the listener/s, filled with loads of great riffs everywhere that remind you of the time when traditional heavy metal was still embryonic; The Offering is an overdose of sentimentality. So many good tracks are on here that you would be messing up if you played only a select few and not the entire album; hence the record flows like melted butter. “Heavy Metal Inferno”, “Night Rulers”, “To the Lions”, “Exiles in Hell”, shit, the entire record is a gift to anyone who likes heavy metal the fossilized way. I just can’t get over how well Wild Witch makes each song its own, with riffs and solos that not only match the pacing of the music but displays a high level of understanding and proficiency. You hear the first song off The Offering and think, ‘dam these guys can play’ which slowly evolves to ‘these guys rip!’.

By the second half you realize The Offering is timeless; “Diabolic Jaws”, “Exiles in Hell”, “Lightning on the Road” all reflect the dedication of a metal unit in creating a record that separates from so many bands lack luster efforts. Guitarist Mariano Burich works wonders with his leads and solos, this guy slays! His ability to adapt to so many tempos without fret is a treat to hear. His playing on The Offering is for me the main highlight of the record given the music is primarily riff driven. And with drummer Weiberlan Garcia doing such a fine job of following Mariano’s leads, the record sounds tight and ideal for the production. In addition to the fine drumming and swelling confident guitar work, the vocals of Felipe aren't too bad (in fact I like them) considering he was compelled to take over such duties after the primary singer Flav Scheidt left the band whilst The Offering was being recorded. I visited Wild Witch’s debut EP and I must say even though Flav’s work on Burning Chains isn’t to my liking, they’re not that shabby; however, I prefer Felipe’s because his voice brings out that Brazilian accent so well, thus creating a grounded vocal style.

The musical craftsmanship of Wild Witch as a trio sounds phenomenal; however, having acquired yet another new member, this time to fill the gap on the drums, I’m keen to hear what direction the band will be steered in if a new record is in the making. This is their best material recorded to date, I hope nothing else changes in their lineup given the great chemistry shared between Felipe and Weiberlan sees The Offering climb great heights.