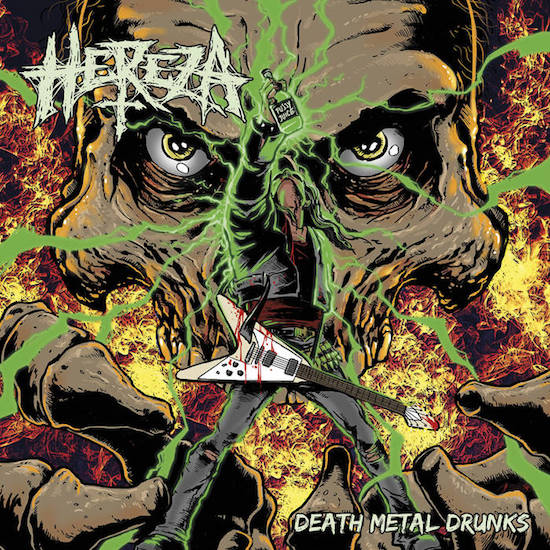 Originally formed in 2014, Beli Manastir, Croatia but currently residing in Stuttgart, Germany, Hereza's obvious change of scenery coupled with fresh blood from new members resulted in completely different record and view of the world. Well, maybe not completely but to borrow from the promo flyer: "No 'pre', no 'post', no 'tech', no 'prog', not even any 'swe' references or connotations - the death metal drunks Hereza return with sheer fun and straightforward death'n'roll attack."

First look at the cover and title should give you an instant indication that we're up for a change compared to the predecessor. Dark cover of I Become Death was replaced with colorful art of a guitarist holding the bottle of booze aptly titled Death Metal Drunks and while death and zombies are still the lyrical theme across the whole record there's more emphasis on sex, drugs (in this case alcohol) and definitely death'n'roll.

And while they never were 'tech' or 'prog' the fascinations with Swedish sound was definitely there and this part is gone too. Dirty and distorted sound of HM-2 is replaced with cleaner, modern and more polished sound but don't fret, the punch is not only still there but it's bigger and more suited for their refined style. Hereza always had punk overtones but this time it's a lot more pronounced pushing the album into more thrash/hardcore-ish territories and combined with free spirited lyrics adds to 'n'roll atmosphere. And packing 11 tracks into 28 minutes definitely gives you that fast party with nonstop shots and fast girls feeling with each track bringing different flavors to this orgy. Style-wise ranging from death, through thrash, punk to pure rock Hereza makes sure you drink as much of their cool-aid as possible and spices things up with variety of tasty solos, tight blast drumming or sound effects of running horses, trucks crushing bones or moaning cowgirls. Extra bonus points are earned for 'Necrobitch, Cowgirl From The Morgue' where clean guitar classical strumming always gets my heart pumping when incorporated into a metal track.

No matter how you slice and dice, this record is just pure fun and should be treated as such. No hidden, life changing lyrical messages or trips into unknown musical territories but if you need a laugh or break from everyday seriousness make yourself a drink, cap-off that beer and enjoy the party.

While some will definitely miss old school Swedish sounding Hereza I'm definitely not one of them (I've literally heard over 100 bands with that old school sound this year alone!). So, while still not breaking new grounds in originality department it takes good party and a massive hangover to break from the old and go for the change, and it looks like Hereza knows how to party.

Sleazy, drunken thrashing/speedy/punky death metal is what these nomads under the moniker Hereza bring to the masses from their Croatian whereabouts. Death Metal Drunks is the band’s third bottle of liquor after having 2 prior episodes that seem to have sat nicely. Though I haven’t heard them, I’m betting it’s along the lines of what’s disgorged here.

For me I can’t really take the entire record seriously as some of the songs are mostly a spewing of ludicrousness.  Definitely not meant for the sensitive, you'll need some sense of humor to get through and find enjoyment out of Death Metal Drunks, as the lyrics are precisely what you would expect to hear some crazy alcoholics sing about amusingly. However, there are songs like “Rak n' Roll” and “Kopam Oči, Režem Jezik, Prste, Nos I Uši” that have a lingering breath of seriousness. Some mythological spice is thrown into the lyrical concept also as heard on “Dullahan” and “Back to the Grave”. In short Death Metal Drunks is a mixed mug of humorous and dark themes amongst other things.

The instrumentation drifts towards the punk thrash and speed-metal sides of the gamut; though death metal is present, its challenged heavily by other genres many times to the point of almost being wiped from the record. You can hear it being manifested on “Back to the Grave” and other entries but to a very low effect. The music is death metal oriented where the vocals are concerned, but the drumming and riffing paint an early 2000’s thrashing scenery. “Kopam Oči, Režem Jezik, Prste, Nos I Uši” shows off some Croatian black metal riffing that alters the atmospheric presence of the record and keeps things interesting.

As a testament to the outlandish, assailant and careless nature covered, songs such as “Genocid”, and the self-titled “Death Metal Drunks”, show just how much these guys care about your feelings, with the lyrics being both cryptic and candid at times, it’s really a cluster of subliminals and crystal-clear morbidity.

I’m very surprised this was released on Godz ov War Productions as they’re known for publishing dark and threatening music; however, everyone deserves to have some fun every now and then. And that perhaps is the best word to describe this record; ‘fun’, it is filled with humor and lots of degrading lyrics for all kinds of people, down to the misogynistic as heard on “Stupid Spoiled Whore”, that has an ending reminiscent of Slipknot’s “Eeyore”.

The timing on Death Metal Drunks is right for this kind of record; not something you would want to hear 38 minutes of. Starts and meets an end as quick as being spat on with disdain and fury, Hereza has composed 10 songs that bring both fictitious and realistic, yet humorous and provocative themes. As far as replay-value goes, Death Metal Drunks is worth a listen, maybe 2 depending on your preference in metal; but these songs guarantee you’ll get a full can of depravity.