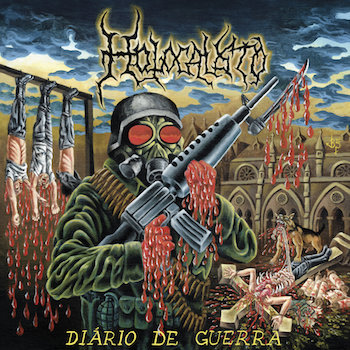 It should be nearly a matter of course that people who like thrash and black metal should also have a weakness for black thrash metal. At least in my case, this is true. However, do not jump to conclusions. This does not mean people like me fall in love with each and every black thrash horde, regardless of its exact musical content. Holocausto - stupid name - challenge me with their diary of war. They do not lack aggression, definitely not. The gas mask and the cartridge belt on the promo picture do not promise things the music cannot keep.

Too bad that black thrash is a sub-genre that asks for the right balance between dirt and precision. That's where Holocausto fail on the here presented work. Yes, they fire some effective riffs into the enemy lines, but it happens too often that their songs drown in chaos. Pure aggression can be wonderful, but here it distracts the musicians from the essentials. Coherent song structures are a matter of luck and the iota of melody that even extreme metal needs is sometimes not identifiable. "Guerra Total Apocalipse" has a really diabolic beginning, it almost sounds like the young brother of Slayer's "Black Magic", but the Brazilian combo is not able to make gold out of this start. Instead, the great riff of the beginning gets almost completely lost and that's a shame.

Yes, the band is good in torturing its instruments, but creativity does not belong to its core competencies. The sparse playtime of half an hour speaks volumes. Nevertheless, the vehemence of the dudes is impressive and so it is not easy to make snap judgments about them and their farewell album - M-A says they have called it a day and one thing is for sure: this is no big loss for mankind, because regardless of the individual perspective, everybody must realize that the guys from South America do not offer things other bands have already offered in a better way. This applies for both their merciless attacks and their rare songs that creep slowly forward like a malicious reptile ("Ocupação Hostil").

At the end of the day, the album with the brother of Sodom's Knarrenheinz on the cover rather sounds like the debut of angry teenagers than a work of experienced veterans. The non-transparent production also appears as a sulphurous brew and shows no signs of maturity. Everything is sacrificed on the altar of apocalyptic violence and that's not enough in order to receive euphoric reactions. In view of the competent use of some well-hung stylistic devices and the stubborn nagging of the lead vocalist, a rating of 54% seems to be okay and I add 1% for the German word fragments in the intro. But only people who like to be tortured will give a better evaluation.