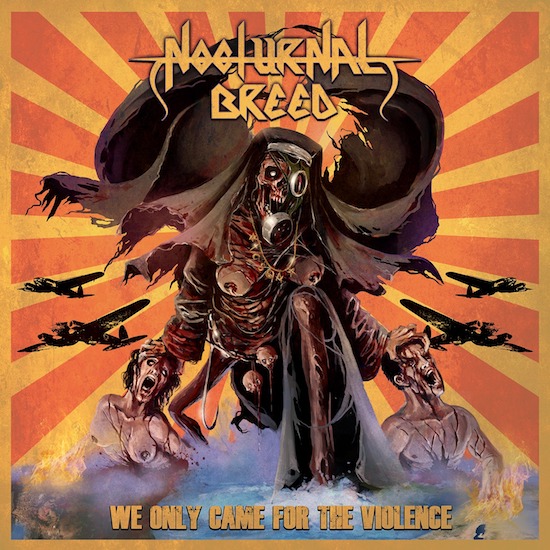 Among all the various variations of metallic music, black thrash plays the role of the naughty child. Totally ill-mannered behavior that is fed by dirty F.O.A.D.-attitude is almost the most important prerequisite in order to pen a strong work of this genre. But even if it sounds nearly unduly academic, competent song-writing is of high relevance as well. Many bands, regardless of their style, rely on only one composer and that’s always somehow sad. It mostly feels that we do not get the entire creativity of these formations. Thus, it is great that Nocturnal Breed return with an album that presents songs of each and every band member. Naturally, this is no end in itself, but the tracks of the both casually and aptly titled We Only Came for the Violence illustrate that this approach can result in a lively, dynamic and varied full-length. Good teamwork, no doubt at all.

Nocturnal Breed know the importance of high velocity and so they throw a couple of rapid outbursts into the crowd, but they also like mid-tempo tracks with insidious riffing and vocals that convey not only a hinge of insanity. “Sharks of the Wehrmacht” (written by S.A. Destroyer) is a jewel that showcases the aforementioned features in a very good way. On the other hand, relentless high-speed eruptions like the ingenious “Limbs of Gehenna” or the equally frenetic and unbeatable “Nekrohagel” (both written by T. Terror) are aligned with the dogma of the debut of a once great formation; they show no mercy. Between these poles one finds many bastards, for example “War-Metal Engine” (S.A. Destroyer). It combines impulsive, fast-paced verses with a stomping, very catchy chorus which seems to originate from the archives of a traditional Teutonic formation. “Bless the Whore” (I.Maztor) is a representative of the art of wicked, fast riffing and V. Fineideath contributes the rolling guitar sounds of “Frozen to the Cross”, a song that picks up the formula and the drive of the highlights of Darkthrone’s “Ravishing Grimness”.

The greatest surprise of this work is “Can’t Hold Back the Night”, another track written by S.A. Destroyer. Its name could be stolen from some hair metal posers, but don’t jump to conclusions. This is a meticulously designed piece that houses both pretty melodic sections and a bittersweet, pummeling chorus whose urine marks its territory impressively. Indeed, Nocturnal Breed show the world that even the stubborn and narrow-minded subgenre leaves much room for different approaches and by the way, they also prove their good taste. The guys cover “Desecrator” of Storm and the swirling guitars of this nasty piece of metal lead to a perfect match with their own material. In view of so many direct hits and a playtime of almost 50 minutes, an exorbitant length in this genre, we can neglect the fact that two or three tracks cannot fully keep up the momentum. Yet this does not mean that they fall through the net. For example, the stoic lines of “A Million Miles of Trench” (T. Terror) have their charm and constitute a good closer (but not an outstanding one). Even the title track which suffers from a rather stale riffing at the beginning turns out to a solid mid-paced number.

In view of the varied song-writing one might have doubts whether this is still a homogeneous work. Rest assured, Nocturnal Breed’s songs have a common denominator. The album exudes vileness from the beginning to the end and the freaky, yet malicious vocals of S.A. Destroyer are a second reliable element. The production, to lose some words about it as well, delivers the necessary amount of pressure and puts the focus rather on clarity than on a somewhat rancid, genre-typical appearance. Either way, the songs shine in full bloom and so even an old German grouch like me has nothing to grumble. Shit! However, what’s bad for me might be good for you. Show your friends that your musical taste is better than theirs and get We Only Came for the Violence – the sooner the better. Guess you will enjoy it. Otherwise the Nekrohagel will come over you.