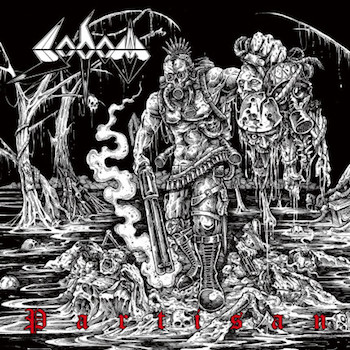 2018 was only five days old as the big bang happened. Angelripper fired his band mates and began to open a new chapter in the history of Sodom. Roughly eleven months later, the new trio, sorry: quartet, has released its first output (if we neglect a powerful cover version of Sacrilege on a RockHard sampler). Two new songs stand in the focus, accompanied by a decent yet not really necessary live recording of "Tired and Red". Too bad that the band passed the chance to release three new studio pieces in order to build a bridge to the once very important and groundbreaking Expurse of Sodomy EP, but okay, we are men enough to stand this little pain... Anyway, the (pretty lousy) artwork makes blatantly clear that Tom and his new fighters want to pay tribute to the very early years of the Ruhrpott legend. Decide for yourself whether this is embarrassing or authentic.

The music itself shows a metal unit in good form. The only "flaw" of this work is that "Partisan" has the honour to be the title track, although "Conflagration" marks the better song. I admit that I never had great sympathy for partisans in history, because from my point of view, they stand for devious, murderous actions against regular armed forces. But irrespective of this, the title track does not lack vehemence, even though the solo is not seamlessly integrated. The song shows that Sodom do not go back to albums such as Masquerade in Blood and the pretty lame, self-titled release also does not work as point of orientation. Instead, there is no great difference between the here presented new tracks and the material of "Decision Day". Okay, the new songs spread some more old school vibes and create a slightly darker aura, but the general recipe, the mix of thrash metal with blackened elements, has remained unchanged.

"Conflagration" is nothing less than a new classic. Right from the get-go, energetic riffs and lines drive the fast-paced tune forward. A more or less perfect flow, combined with the well-known, malicious, somewhat nagging voice of Tom, builds the foundation and dynamic tempo changes set effective impulses. Some drum figures during the mid-paced part remind me of Witchhunter's fills and there can be no doubt that Chris (R.I.P.) would have loved the new songs (but only as long as he would have been responsible for the drums). The apocalyptic, blast beats driven ending comes to soon, but this remains the only minor mistake of "Conflagration" which truly lives up to its name. Long story short, this EP marks a promising start for the reborn institution. Angelripper, Blackfire, Husky and dude whose name I always forget, I am ready for the next full-length.

PS: Please compare this EP with the last output of Mille's commercialized gang and then you know that we cannot say a single word against Sodom's integrity and their unbroken musical fury.