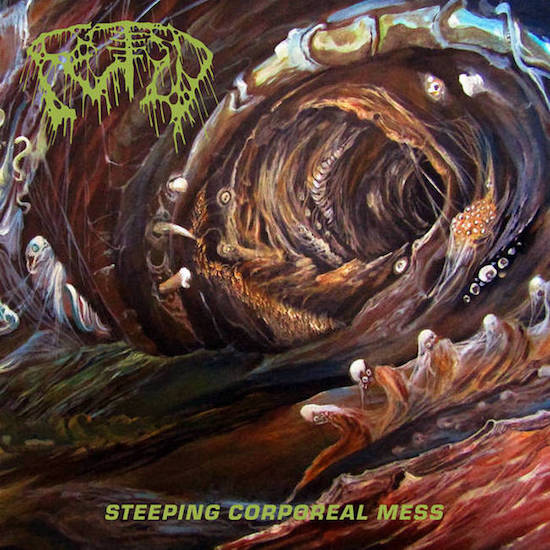 After taking the underground by force with their 2017 demo, Sentient Pile of Amorphous Rot, Fetid has been one of the bands on everyone's tongue in high expectation of what else is scheduled to a come to fruition from the band. That demo pushed what was expected of the band to a high measure. While not a perfect record (none are anyways), Sentient Pile of Amorphous Rot existed within the sonic pleasures of many death metal connoisseurs. The outlook of Fetid was filled to the rim with the highest of prospects that left only time, work and dedication to fulfill. One year following the demo, a full-length record titled Steeping Corporeal Mess is set to emerge from 20 Buck Spin, a record label recognized as one of the flagship provinces housing heavy hitters of the underground. At the announcement of the first snippet “Reeking Within”, which was then followed by “Consumed Periphery”, I knew Fetid had brought the filthy goods.

Steeping Corporeal Mess is a death/doom/grindcore record that outperforms their debut effort significantly. One notable aspect from the inception is the production which has taken a step up from the previous entry. Though clearer, the mossy sensation of Fetid’s sound is kept but is also amplified, giving the music a refined yet familiar audible and atmospheric presence. Steeping Corporeal Mess is a well-groomed entry that capitalizes on the momentum stirred on the prototype being Sentient Pile of Amorphous Rot. Five songs worth 32 minutes of filth spread a diabolical spewing of guttural throats, riffs, hooks, and a load of technical drumming. “Cranial Liquescent” incorporates a strategic blend of pulsing guitar chords, chunky breakdowns, seamless transitions and an adequate supply of technical tenacity. That ‘freight-train’ style of chugging is present on every track hence the spirit of the old days is ever potent on this release. If you enjoyed “Cranial Liquescent” then you most certainly will get a lot more than a kick out of “Consumed Periphery” which is then followed up by “Dripping Subtepidity” that is marked by all the praiseworthy characteristics of Fetid.

On Steeping Corporeal Mess there is a greater sense of technical ability, and its confidently brought to front in a manner that shows Fetid is quick on their feet and determined to create music that stands apart from their peers and the band's own prior release. The heightened technical aspect coming from this sedulous contingent is pleasing to hear, more-so, it portrays Fetid as being bent on creating material that challenges them as musicians. What’s also great about Steeping Corporeal Mess is even though being significantly more intricate, there is memorability to the songs, it’s not random passages of instrumental complexity tossed just for the sake of, there is a harmonious element existing between serpentine sections and the musical motion of Steeping Corporeal Mess.

Can’t forget that nostalgic intro piece to “Coalescing Decay” that helped greatly in making Sentient Pile of Amorphous Rot an unforgettable demo; Fetid tried to recreate that feeling on “Draped in What Was” and they did but not with the same effect as done before. I think they should have placed that track up the order to assist the general temper of the recordings. In an attempt to boost the aura, some sections (notably the death/doom) seem to call for the intervention of keyboards, as Fetid’s sound and music appears to have the competency to facilitate such. Would like to see it utilized more should new material be recorded.