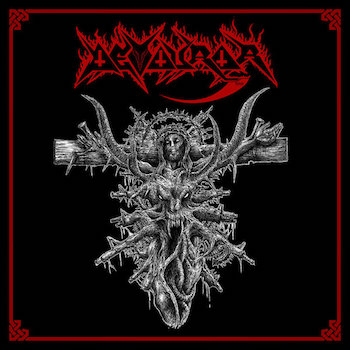 A black/death metal band with members of Impiety and Infernal Execrator, you say. I've got a sneaking suspicion what this is going to sound like, especially taken into consideration that Impiety mastermind Shyaithan is the chief song writer here.

And yes, this makes me think of Impiety a lot. The riffing as well as the unrelenting violent execution of the music could easily have been on any Impiety release since "Kaos Kommand". I realize that it would be easy to write this off as a copy but even though there are clear similarities between Impiety and Devouror, the latter has elements that set it apart from the first. For a start you have the vocals that are more guttural, a hoarse bark that complements the menacing music to great effect. I also hear more of a German thrash influence in the riffs that are fired at you at high velocity and the band also makes more use of guitar leads than Impiety does. In both the riffing and the leads the spirit of the old Destruction records is present and gives the roaring black/death metal that needed old school vibe. The songs are fast and aggressive but occasionally use more pounding parts to allow for variety without losing their intensity. The loud and clear production makes the total package sound energetic and fierce, just like a death/black metal release should sound. Proceedings are closed with a brutal cover of Sarcofago's "I.N.R.I.", although I personally would've preferred another original composition by the band, but that's just a detail.

This is an enjoyable black/death release, that sounds as professional as the individual members' backgrounds make you expect it would. Shyaithan's influence is certainly clear on this, but the band knows how to add their own flavor to the soup to avoid becoming a carbon copy. Recommended!