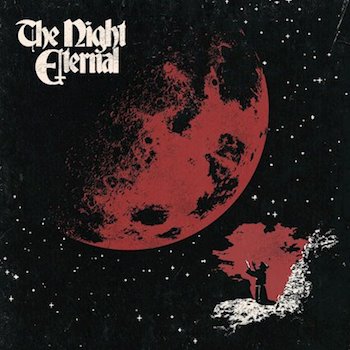 The Night Eternal have got something special here, a dreamy type of heavy metal that I can't stop listening to at the moment. It's only 4 original songs but the delivery tells of way greater things to come. This record is a surprise especially at this point which sees heavy metal blossom with new bands every day. Hearing The Night Eternal reminds me of so many bands, but more specifically they sound like a bridge between Demon Head and a much bigger band that I refuse to mention. It also has a very progressive overtone that keeps me keen during its entirety, further adding to my likeness of the material and replay-value. It has all the right amounts of mystery and progression for a heavy metal record of this nature. There's a haunting and foreboding yet very optimistic sound thanks to the vocalist, his voice brings The Night Eternal to the table of good debut records thus far for 2019. His range is good and has a professional sound but also reeks of a lingering underground rawness. Don't let your guard down, The Night Eternal is one of the bands to stay abreast with for 2019 and forward.

The first note of the title track gave me the impression that the music here's of a high caliber, as it progressed every song following sounded better as if trying to out-perform the prior. They speak volumes of The Night Eternal’s ability to compose music that carries with it a succinct theme. This 4-track EP is superb, it's a fountain of ear catching melodies that are rich in atmosphere. Just imagine a full-length effort from this band, it would stomp all over the underground metal floor. The music is so good that the fantastic artwork is provided with an air of animation. From the opening lick of “Eternal Night”, to the guitar soloing and transitions used to bridge the chorus, these tunes extend their reach for the listeners ears.

You can't pretend the music is bad, no way, it's top of the line material that sounds as if it was produced in the mid-80s. Whilst listening to “Mark of Kain” I developed such a likeness for the material that it had me wishing the session would not come to an end. There's so much to extract from this material that it buries the feeble efforts of other bands both underground and commercial. Not too impressed with the Judas Priest cover, it's not bad, it just doesn't suit the band and tone here, as the tunes created on The Night Eternal Dark are dark sounding. However, for what's delivered as original tracks I'm very pleased and hope that a full-length record is or will be in the works soon.