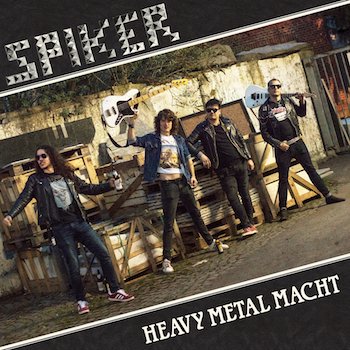 Spiker? Who? Ah, a new band from Kreator-City. But do not even think of thrash metal. The German lyrics work as an omen. This is very Teutonic metal, but, what a pity, the first three songs sound like a modern version of krautrock. Some speedy elements cannot hide the fact that the band prefers absolutely unspectacular tempos. And as much as I regret it, that's not the only bad decision of the dudes. Their melodies are completely stale and the vocals suck. Sometimes the songs sound like a parody gone wrong and the harmless and ridiculous lyrics add insult to injury. Why did an interesting label like Dying Victims Productions sign these amateurs? I admit that a few sequences indicate a solid musical understanding and the instrumental part of the awkwardly titled "Der Rock der es bringt" could make fun if it were integrated in a better song frame. But come on, at the end I am listening to some songs that the stylistically comparable Atlain, this underrated Teutonic force from the mid-eighties, would not even have recorded for the first demo.

"Kommando" deals with the battle of Stalingrad and everybody will understand that this topic seems to require a more powerful design. The comparatively high velocity increases the dynamic of the output, but now the neighbors of Mille sound like a rock against communism band - of course, this is not to say that the dudes have any kind of right-wing background, don't get me wrong. But the voice is expressionless and things like verse metre seem to be completely unknown to the guys. Details aside, this song is acceptable for a group in its infancy. Together with a small number of further sections, it reflects the band's enthusiasm and I do not doubt the passion of the dudes. But already the absolutely boring riff that kicks off the EP or the pretty well-balanced, yet powerless production drive this work into the ditch and the closer falls back on the tiring level of the first three pieces. What a good idea that the formation did not record a full-length...

Enough said. The material of Heavy Metal Macht can work live on stage as long as the audience is drunken, but it needs a lot of care, exercise and evolution until this unit can be seen as a serious ambassador of heavy metal. Excuse the pun, but this EP should be renamed into "Heavy Metal macht nix", because its songs are faceless and leave no impact. Hopefully the third output will show us the real skills of these guys.