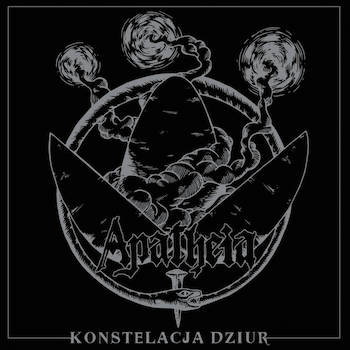 Lost amidst the sea of black metal releases is Apatheia’s Konstelacja Dziur released in 2018 through Godz ov War Productions. This is the band’s first album launching them into the already crammed to the rim genre. This band of 3 plays a fiery style of militant and misanthropic black metal bringing to rise thoughts of Marduk with their landscapes and machine gun style blast beats. This is a record that implants feelings of agony and hardship by means of nihilistic lyricism and a strengthening guitar leads that have an overcast feeling of despair and urgency. Building in momentum as the record tramples along furiously, a shift in direction is always insinuated, thus widening the peripheral view of Apatheia’s musical outlook.

“Odmętnia” is pretty much the blueprint of Konstelacja Dziur’s idea. Strong blast beats and passionate vocals branched by waves of tremolo riffs form a sonic collateral swarm of extreme metal. Each emotional element manifested is ushered by a fleet of blast beats; the drummer definitely has a thing for speed, that I can say, however technical ability also comes to front when factoring “Ślepe Oddanie”. A strong entry on the album that paints a conceptual image of inescapable demise, candid pessimism and depression. Manufacturing a mental portrait of a hamster running within a wheel, unconscious and blinded by the illusion of false hope, the common man in his state of ignorance and arrogance is met by the one true thing that is promised. Profound and thought-provoking lyrics greet the listener on each track, compelling him/her to look beyond the veil. In total adoration of how well Apatheia use the guitars to cast multiple feelings to the music whilst maintaining aggression through every beat, I find it impossible to not place Konstelacja Dziur alongside some of my favorite albums of the modern age such as "Exercises in Futility" and "To Those Who Glorified Death".

Konstelacja Dziur is a journey through many emotions, rich landscapes take hold of the atmosphere and changes frequently as though being in a world of seasons occurring at the same time. Although most songs range between four to six minutes I never noticed how time consuming the listening experience was, even on the ten-minute thrills of "Boże Ciało" and "Supernowa". I did notice the lack of variation occurring towards the end that put the record to a stand-still of sorts. This diverted from the movement created thanks to occasional switch in drumming tempos and more, so the guitar leads. However, for the majority, 51 minutes of Konstelacja Dziur went by relatively quickly. Songs like the opener “Odmętnia” to moments on “Raj” and “Zimna krew” ensured that your time would be worthwhile; plus, with the lyrics possessing so much depth, Konstelacja Dziur shun even more brightly.

A good foot forwards this debut is, however I believe Apatheia is merely finding their comfort zone as I can hear there's potential for more expansive songwriting. I see Konstelacja Dziur as being an experiment of sorts, one that turned out well. There were some instances in which the album could have ended early, but I think Apatheia were simply testing their endurance with regards to how well they could sustain the courtesy of the listener. For their next record I would like more variation in the drumming and riffs. Their method of approach is good but could be ameliorated for better results.