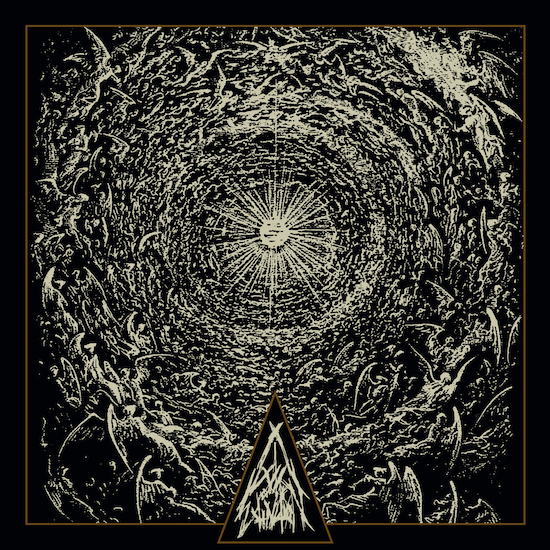 I have often summoned the thought of encountering a "musical" effort that would not only be ripe with fury but also boast a decent level of fright. Something that would be different from what I have already encountered yet still have the recognizable traits of the genre. Cult of Extinction has danced with that which I speak of, in delivering a bone chilling, yet bellicose escapade, Ritual in the Absolute Absence of Light. Though not as potent as I would like it to be, it surely makes a confident stride towards achieving exhilaration, fear and belligerence in one run. This 32-minute process of spiritual cruelty in the shape of Ritual in the Absolute Absence of Light, does not exclude atmosphere when trying to encompass the listener whilst conjuring nightmarish images of parasitic spiritual warfare.

Ritual in the Absolute Absence of Light excites and arouses the listener/s thoughts and its bestial nature is mantled by unsettling musicianship in all aspects. This is an evil, unnerving piece of material, a record that not only accomplishes a fearful atmosphere, but is not reluctant to spar viciously with black/death metal bestiality, therefore, displaying a combative drum, guitar and inhuman vocal performance. It is bathed in spiritual warfare, the vocalist sounds as though multiple numinous forces are at war with each other, with aim of acquiring a human vessel. Like multiple diabolic entities forcing their way into one existing body, Ritual in the Absolute Absence of Light channels indiscreet hostility from beginning to end even during slower moments, no compromises! I’m impressed with the drumming to a great degree, hence it is arguably the key to making Ritual in the Absolute Absence of Light a rancorous awakening, along with the barbarous vocal exhibition. The eruptive snare and cymbal throbbing, screeching guitar riffs and possessed-sounding throats all have the characteristics of the bestial “war metal” genre; however, it's the atmosphere that makes this a terrifying experience. Thing is, alongside the furious galloping frenzy, lies an uneasiness manifesting on all sessions. An uneasiness that would meet a sinister climax half-way through the recordings; Ritual in the Absolute Absence of Light jumps out, bringing to life a potent feeling of trepidation with an almost surreal and visceral sample in machinating with “Possessed by a Servant of Iblis”.

NB: The opening power-chords on “Possessed by a Servant of Iblis”; hearing it on a second instance when knowing what follows, raises the frightening effect of the exorcism sample.

I’ve encountered a fair deal of that kind of thing back home in South America by both frequent word of mouth and as a witness; yes some of it was a load of antics used by the “holy” church to amplify fear among the sheeple congregations; however, there was one instance I recall which proved to be troubling for a short period (in retrospect), though seemingly lengthy at the time; unlike other occurrences that appeared scripted, this event was agitating.

“Possessed by a Servant of Iblis” captures the surrealism of seeing an occurrence of such nature. Don't know where they got that sample from, but does it raise hairs. Sounds like an exorcism is taking place just next door. It builds an uneasiness, a looming air of discomfort that coats the record. And speaking of discomfort, “The Descent” appears heavily influenced by black metal in the likes of Pa Vesh En; yet, still accompanying the interlude of sorts, is an unyielding weight of aggression and fear, further enforcing the bestiality already dominant on Ritual in the Absolute Absence of Light. As a warning, the album cover is enough, looks like a congregation of malefic entities swarming, whilst awaiting the entrance-opening leading to the nucleus of a physical vessel. Or thousands of morbid souls already existing within one shell fighting for permanent control; either way, much credit to the artist responsible in being able to portray this chaotic scene as a representation of the music.