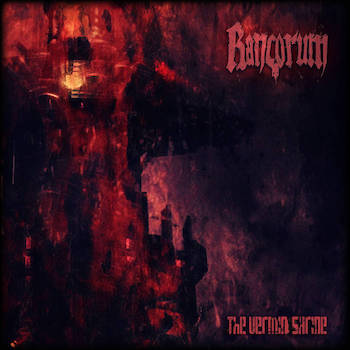 Romanian death metal isn't something that usually rolls off the average metal connoisseur's tongue; Scandinavia and the U.S. Seem to have some primitive stranglehold on the genre, with some honorable mentions around the U.K. and Eastern Europe. I'm sure there are plenty of bands in the Romanian part of the world that just haven't hit my personal register yet, but you learn something new every day, right?

It's a nice surprise to hear of Rancorum, whose debut CD The Vermin Shrine seems to encapsulate all that is pure and aesthetically right within the medium. It also proves that there is solid death metal to be had some 35-years after its inception and subsequent apex. With Rancorum I definitively hear some old-school influences from Grave to Treblinka by way of Sweden, and yet rather than pimp off that early sound and lazily phone it in, Rancorum slices off a limb and hands it over with a pounding piece of deadly mass. This CD is, in short, a deadly effort in every facet.

The familiar crunch of down-tuned chords ringing out under vicious growls (while retaining a wonderful pattern of clear enunciation for us lyric geeks out here) sets the tone for the entire album, where each track feels like a short story of its own and nicely-added soundscapes separate the songs. One of my favorite tracks, “The Shining,” changes tempo from tempestuous resistance to a lulled state of musical possession so perfectly that it feels like a horror novella set to music. Again, the transitioning soundscapes between songs just add to the feel of this CD. The familiar antiquity of the sound  seems to flow in perfect tandem with the production that most bands back in the day would have sold their souls for, making the collective feel that much stronger. When a band truly feels its music in every solitary area, you can just tell, and these guys do.

Lyrically, there seems to be more than a casual strength to the album in that there isn't time or need for fantastical embellishment, so telling a complete, concise story within six short stories seems to follow a very natural stream, which is always a plus. That said, the music and its slick switching from crunching death metal to a slower, almost doomy progression is what makes The Vermin Shrine both tangible and memorable. It's just a damn good effort overall.

I have a good idea Rancorum will be around for a while, and they absolutely should be. An ability to craft heavy, dark death metal with precise attention to style and modern-day nuances doubles up to showcase The Vermin Shrine right up there with any modern heavyweight you wish to present as an example. Extreme music isn't going away and it's not being invaded by hipsters and thrill-seekers as long as bands like Rancorum keep the metal brooding and the lineage strong.