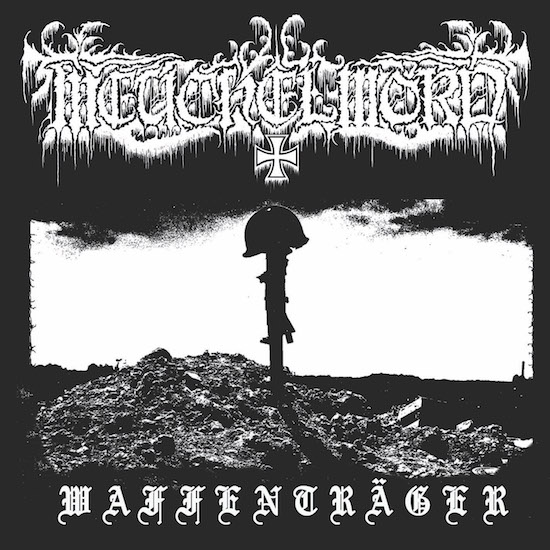 Meuchelmord hail from Lower Saxony, Germany. It's another one-man project and the dude sings in his mother tongue about a very German topic, you guessed it, World War II. This is nothing new, but always somehow inspiring. I admit that I would feel better if I could write this review in German as well. But who cares about my feelings? The female half of the world population does not - and I hope the other half is also not interested. So, let's have an ear for Waffenträger.

It's more or less always the same with these lone wolfs. The strength of their works, homogeneity, is simultaneously their weakness. The songs of Waffenträger are obviously cut from the same cloth. No one will get a deadly heart attack in view of the big excitement when pretty icy guitar leads are driven forward by primitively hammering drums. The third ingredient is the hoarse screaming, a run-of-the-mill vocal performance. Nevertheless, Cernunnos, the man behind the name Meuchelmord, ensures a certain degree of variety in view of a small number of tempo changes. "Kaltes Land" is his kind of doom metal and it expresses pure harshness due to its hellish riff that shapes the entire track. This piece spreads the vibes of songs like "Funeral Dawn" and therefore it could also work in the context of most Marduk albums, a real highlight of the lonely fighter.

Although the mix lacks clarity, it puts the songs into the right light. The dominating guitars do not leave much room for the lead vocals and I understood only single words of the German lyrics, but they are sharp-edged and pungent. Each and every tone makes clear: dear friends of sonic violence, you are listening to black metal. Of course, Cernunnos does not create something totally new. Historical samples from the Third Reich, Stuka sounds and so on, you will all find it here. Seems as if the German trauma lives on and the artist visits different places of the war that devastated almost the entire European continent. "Ostfront" speaks for itself, "Feuersturm" deals with the dubious bomber attacks against the German cities and "U-Boote vor!" invites us to study the warfare under water. Only the non-heroic end of evil Adolf in the bunker is missing... By the way, the promo sheet is talking nonsense. Meuchelmord do not present the war in an "incredibly sorrowful and melancholic mood". Once a wise man said that every anti-war movie is simultaneously a war movie and I believe he was right. However, sorrow and melancholy are definitely not the prevailing emotions on the here presented full-length.

While I have written this review, I have ordered my physical copy of the album as well. Why? Well, Waffenträger convinces with its metallic purity, it’s no frills approach and its substantial riffing. One can discuss whether it was necessary to equip two of the songs with alternative lyrics which are contributed by guest singers, but one cannot ignore that Cernunnos delivers a more than solid album. Originality and innovation do not show up, that's true, but have you ever heard a mathematically talented prog metal band dedicating a complete full-length to Adolf's final disaster? I don't. Fans of Marduk, Funeral Mist and comparable formations should do the same I did and order the album. (And by the way, this album is no Nazi propaganda, if I am not totally mistaken.)