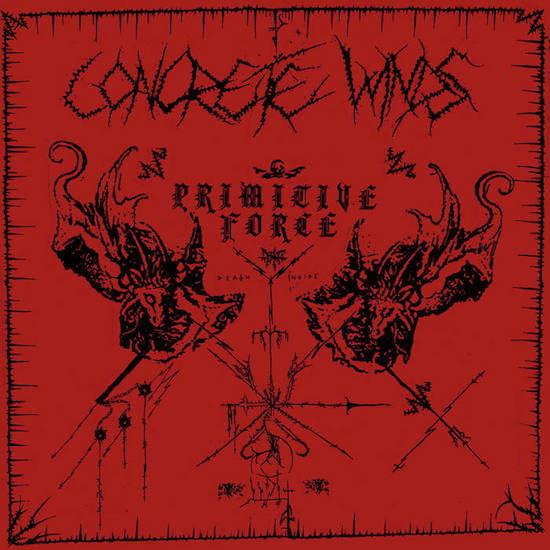 From the ashes of Vorum comes Concrete Winds, and members P.J. and Mikko continue where that band left off into a much more chaotic direction with them unleashing the unrelenting and unapologetic Primitive Force.

This album is a master class of pure and raw death metal that near crosses into war metal but make no mistake this is a death metal album, through and through. The aggressive riffs and shredding from Vorum's last EP "Current Mouth" has been dialed up exponentially, the music here is very abrasive and the focus is on speed. The album opens with an explosion and it never lets off the intensity for a second; all the songs are very short and follow the mindset of less is more, making the most out of a short length all the while maintaining a lo-fi “no bullshit” approach that is very punkish in a good way. They manage in keeping a simplicity that also leaves room for innovation in this very aggressive style of death metal. This album’s main ambition is to push forward the extremity of death metal without the need of incorporating blackened elements and the band succeeds in spades.

The lion share of the music is handled by P.J. who handles vocals, guitars and bass. His guitar work is devilishly impressive, showing relentless shredding and tremolo picking, howling and screeching guitar solos which he compliments with a thunderous and pulsating bass; his vocals are also excellent and are a natural evolution from Vorum, his death growls are much more intense and vicious and are much more present than his echoing approach of his past band, and the added layers of echoes succeed in making the vocal work sound much more demonic and wrathful. Mikko’s drumming is no slouch either, he perfectly complements P.J.’s compositions with unswerving force and brutality, while also adding a layer of complexity, giving this album more variety. The songs Tyrant Pulse, Volcanic Turmoil and Transmission is where Mikko truly flexes his talents and as a whole both members give excellent performances that make this album a quick but satisfying trip to hell.

However the album is not without some issues. While this album does succeed in pushing death metal’s extremity to its logical conclusion on repeated listens it can get a bit repetitive; a common trapping of the genre and while the band does make good use of the short time lengths, the album as a whole ends abruptly. The main flaw however is the production. The band purposefully went with a lo-fi approach that does give the music that underground and dissonant vibe that this type of music benefits from but the downside of this is that the music sounds extremely loud and succumbed to the dreaded loudness war, which whether intentional or not makes the album very inaccessible and hard to listen, especially on headphones. All these issues while not a deal breaker to versed metalheads are a major hurdle to overcome if you’re uninitiated on death metal or if you’re accustomed to the cleaner and slicker production on bands like Death or Morbid Anger, if you’re either of those, this album would require multiple listens with the volume lowered.

Overall Concrete Winds have made a killer debut album, continuing their ambitions from where Vorum left off and being its own unique and distinct project with a lot of promise.