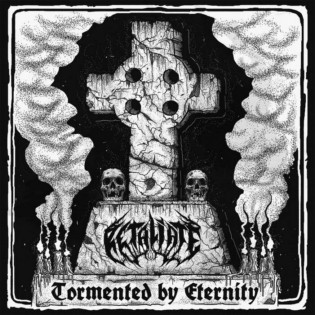 I was approached by this band to check out their new demo. And while I am usually very picky with the albums I choose to review, I wanted to listen to these guys and give them a spin, and perhaps a review afterwards.

The thing is, I don't seek out new bands to listen to as much as I used to. I'm pretty set in my listening habits and there is already a lot of music to listen to, so I don't venture off to unknown territory too often. The thing about Retaliate that I was drawn to, and it might seem silly, is because they are from Brazil. Old Sepultura (pre Chaos AD) is stuff that I grew up with, quite literally. I'm old enough and have been around long enough that I still remember buying "Arise" the first week it came out. And though the only other band I know from Brazil besides Sepultura is Violator, I wanted to give Retaliate a shot.

And I'm quite glad I did.

There are only two tracks on this demo, "Where Yahweh Doesn't Dwell" and "Tormented By Eternity". I have a few problems with this. First, I wish there were at least one or two more tracks, so I could get a better sense of what these guys are all about and two, it's pretty fucking good, I'd just want to hear more.

"Where Yahweh Doesn't Dwell" starts off with a famous piece of dialogue from the great George Carlin. Bonus points have been earned right off the bat, though I do wish they would have chosen something a bit shorter as their intro. When the band finally kicks in, it's an assault of 80's thrash that you know, pretty much everyone should like. It's definitely not like American thrash - this has nothing to do with Exodus or Overkill - but more like European thrash, with some Sodom influences. I can also hear the Morbid Angel influences sprinkled throughout. This is not a bad start at all.

The riffing is quite unique and well executed. The drums are fast and powerful, and the vocals are exactly what you want to hear on this type of record. My only gripe would be the guitar solos - not really feeling them. While they are not your usual Slayer gibberish with just whammy bar gymnastics, they don't offer much musicality. This is an area I would like to see improve in future releases.

Tormented By Eternity is more of the same, which is not a bad thing. I don't hear any Slayer guitar solo influences, thankfully, but I do hear some "Hell Awaits" vibes on here, which truthfully, I was not expecting, but which I welcome with open arms.

This band surprised me, they are good musicians, write good riffs and the vocals are good. They have some good ideas but arranging them in a more coherent manner is the biggest piece of advice I would want to give to these guys. The arrangement of the songs is not bad per se, but at times it feels a bit over the place, like a car driving on the freeway in the wrong direction. Maybe they want that sense of sounding out of control, but with some proper arranging and more thought going into the arrangement of these riffs, they would be a much more powerful entity.

Overall, I quite enjoyed this. Two tracks aren’t quite enough for me, however the material on here is worth a listen.