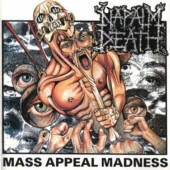 Guess it’s nothing new that Napalm Death began as one of the most anarchic formations ever. But Harmony Corruption showed first signs of a less individual sound and paid tribute to the rise of the death metal legions all around the world. Mass Appeal Madness combines both worlds. On the B side are two new recordings from their second full-length and the riffing of 'Unchallenged Hate' is definitely influenced by Sacrilege’s raw debut “Behind The Realms Of Madness”. The completely insane, hyper-hysterical whining reanimates the band’s very early days and Barney’s deep, pressed vocals fight a losing battle. However, this re-recorded song works like a stun gun – or just like many other pieces of Napalm Death in their very early days. Needless to say that the same goes for the 72 seconds outburst 'Social Sterility'.

Naturally, the main focus was on the A side of the release. The title track is an almost complex piece with many great, unquestioning riffs, double bass attacks and a proper quantum of tempo shifts. Some screams echo every now and then through the inferno, while Barney spits out his lines with disgust. Sometimes bulky, sometimes in a surprisingly good flow, the song is absolutely convincing. 'Pride Assassin' does not deliver any form of weakness as well. This number is more straightforward and rolls over the listener with burning wheels. Both tracks cannot hide the fact that Harmony Corruption had been released only one year before this EP. But okay, this had been a strong album and therefore I see no problem at all.

The quite massive production scores with a cool mix of sharp guitars and an almost dull sound base. The guitars and the voice dominate, but the rhythm section is not just a necessary accessory. The pretty stylish artwork reflects the more or less confusing yet brutal approach of the band and the lyrics are printed on the back cover. So what more could you ask for? Maybe a playtime that exceeds the nine minute mark, but come on, this is a grind-punk-death-hybrid, not an exercise in doom or progressive metal. Or to say it with Barney: “Mass appeal madness eats your brain” and it is not the blame of Napalm Death that our miniature brains can be eaten that fast. And by the way, the short length builds a bridge to the 28 tracks / 33 minutes configuration of the debut. Even anarchists are reactionary enough to retain a remnant of their rebelliousness.