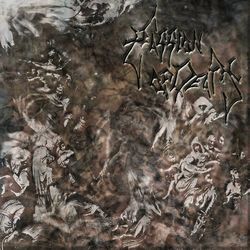 When you think of black metal, Alabama isn't really one of the first places that comes to mind. However, a lot of people seem to forget that music is a universal language, and it doesn't matter where you're from to play and master a particular style. So, I was that much more excited when I learned that these guys weren't from Norway or Sweden.

I knew absolutely nothing about this band before I listened to this album. After running a bit of a background check, I can see that the two musicians on this album, Bryan and Jarvis, have been at it for quite a while, and have put their names on a number of releases. That alone set my expectations on the higher end of the spectrum as quality musicianship is not something I enjoy, but something I expect when listening to music, no matter what genre.

And this album, Apophis, does not disappoint. The level of musicianship is high, and the songwriting is mature and has a nice depth to it. The drums sound nice and organic and raw - a clear "fuck you" to the over triggered kits we are so used to hearing in modern metal. The cymbals sound like actual cymbals, and they placed nicely in the mix. It's strange how we usually tend to overlook these things, even though they are the most basic things when it comes to recording music. Drums that sound like drums - who would have thought?

While the guitar sound is not bad, it's not great, either. That's just my opinion, I would have preferred a bit of a meatier tone on this album. But the overall sound when mixed with the drums is good. It's clear enough, and loud enough. I guess they went with what they felt best, and I can totally respect that. Because no matter how great your guitar tone is, if it doesn't work well in the mix, then you simply don't use it and fit what does. That said, the overall sound and mix on the album is raw, but still very nice and organic. It sounds like actual humans playing the instruments, which is a very warm welcome if you ask me. The album sounds like it was recorded in the late 90's - and to me, there's absolutely nothing wrong with that.

While the band is classified as black metal, and they certainly do have black metal riffs and sounds, they also offer so much more than that. If I were to compare them to another band, or who they remind me of, I would have to say Emperor. There's certainly no resemblance to bands like Marduk or Infernal War on here. Passion of Death is more mid-tempo, they don't really use speed and sheer power to get their point across, but instead they use different approach to arranges which makes everything a bit more interesting. I personally really, really loved the acoustic interludes in the songs, and actually, they are my favorite sections on the entire album. Jarvis is certainly a talented guy, and the acoustic stuff he has come up for on this album is simply beautiful, and very noteworthy. Most bands, when having an acoustic section, will keep them short - around 4 measures long. Here, they are much more thought out, and much more prominent. You can tell actual work and thought went into these passages, which I can always appreciate.

The drumming is also just the way it's supposed to be. Bryan never goes overkill, and I'm glad he doesn't, because he plays for the music first and foremost, accenting riffs in the appropriate places and never playing out of place. While some may call that safe, I call it smart. This is not the kind of album to just have blast beats running all the way through it, as it would just ruin the atmosphere.

My only gripe with the album is that the entirety is pretty much the same tempo throughout. I would have liked to hear some blisteringly fast sections, and some doomy, crunching slow sections. I guess they just didn't feel like it or didn't think it was appropriate for what they were trying to achieve.

Overall, a very solid effort. I respect and admire the organic songwriting and production. Acoustic sections are incredible, and both members give a stellar performance throughout the album. Definitely worth investing some time into.