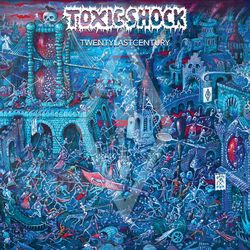 Nuclear Assault? Dr. Living Dead? Suicidal Tendencies? If you like to dwell within this triangle, Toxic Shock from Belgium could be the band you have been waiting for. The dudes combine a very stable thrash fundament with less usual elements. A little bit cyco, a little bit cyber and now close the cycle? Not so fast! Toxic Shock's output commutes between "real" metal and more punk-influenced tunes. "Iceberg" mirrors the heavy metal affinity, "Great Great Gift" with its gang-shouts depicts the punk genes and pieces like "Serpent's Tongue" lie somewhere in between. This mixture gives the material a pretty heterogeneous touch, but this is not at the expense of quality. The guys from Flanders are able to manage all stylistic challenges. It comes therefore as no surprise that the highlights cover the different approaches without exception.

The already mentioned "Iceberg" opens the album with a typical heavy metal chorus and scores with both great riffs and a dynamic solo part. Moreover, its interplay of the slightly angry lead vocals and the boisterous background shouts characterizes almost every song. The pretty strong sound does the rest. The transparent, sharp and well-balanced production puts TwentyLastCentury into the right perspective and underlines the close connection to the bands I have listed at the beginning. (Lunatics Without Skateboards Inc. from the Netherlands also belong to the bands that come to my mind when listening to the here presented album, but I do not know whether many people still remember this relatively unknown formation.) However, I wanted to speak about the highlights; "366ick Days" stands out in view of its high-speed chorus and it emphasizes the punk side of Toxic Shock, even though it varies the tempo. The real crossover track here is "Great Great Gift", a fantastic adrenaline rush that says all it has to say within breathtaking 96 seconds. By contrast, "Headknives" has also trace elements of punk, but the expressive riffing and the heavyweight mid-tempo follows the doctrines of pure metal. Nevertheless, some tempo changes also pave the way for speedy sequences.

These four tracks are my favorites, but they are just the (attention: pun!) tip of the iceberg. The album does not suffer from mediocre pieces, each and every one is worth listening. "Evil Presence" is another very casual song and its riffing after 40 seconds reveals that Toxic Shock are familiar with "Brain Death" from Nuclear Assault's masterpiece called "Game Over". Of course, this classic remains unrivalled (nobody is able to challenge songs like "LSD", "Stranded in Hell" or "Vengeance"), but this does not mean that Toxic Shock have to take a seat in the second or third row. They do not lack any kind of important features, because they combine energy with musicality, liveliness with aggression and bittersweet frolics with pretty intelligent lyrics ("The Rape Continues" does not present idiotic fantasies, its lyrics deal with the exploitation of nature). Hence follows that they definitely enrich the metallic crossover niche. Even fans of formations like Gang Green, who like "Another Wasted Night" as well as "Just One Bullet", should check this album.