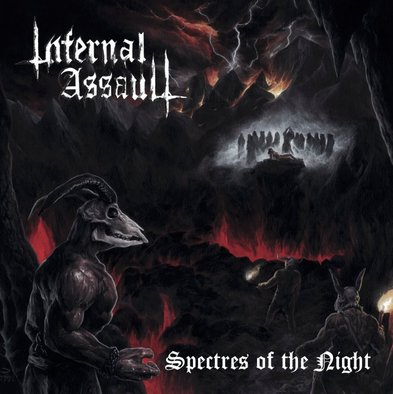 I still regret the sudden death of the German black thrash unit Cruel Force, but some things ease my mental pain. Megathérion's debut EP brought back the Cruel voice and sometimes Infernal Assault sound confusingly similar to the fallen heroes. "Bastard Cult", for example, has the beat, the aggression and the ruthlessness of the highlights of "Under the Sign of the Moon". Needless to say, that the lead vocals also sound pretty similar to those on the second album of Cruel Force. Anyway, Infernal Assault spread the virus of blackened thrash metal in its pure form and all supporters of the Norwegian community (Aura Noir, Deathhammer, Nekromantheon) or the German scene (early Ketzer, Eurynomos, Desaster) will love this double EP which consists of six previously unreleased tracks and the songs of the first EP.

Sometimes albums which are actually a double EP are pretty difficult and suffer from inconsistency. Aggravating the situation, three of the "new" songs have already been recorded in 2014. But this is no problem in terms of a narrow-minded style and black thrash is not known for its cosmopolitan way of thinking, to say the least. Even though there are some years between the recording sessions, significant differences do not show up. Like any other honest black thrash horde, the dudes of Infernal Assault are not interested in complexity, experiments or stylistic adventures. While despising complexity and innovation simultaneously, they take the road straight ahead. Nevertheless, maybe without knowing it, they have created the first piece of a new style: relaxed black thrash. The mid-paced "White Fire Rapture" scores with a primitive and casual guitar line that lends the track an exceptional flavour. However, usually the band prefers to put the pedal on the metal, even though it does not create the stormy fury of formations such as Condor from Norway. Either way, the Teutonic force has a knack for quite catchy guitars ("The Sign of Mayhem" or "Horned Plague") and combines this talent with an affinity for grubby scenarios. I really don't have a clue why they saw a reason to offer their version of a Venom classic, but I admit that "Live Like an Angel (Die Like a Devil)" does not hurt the flow of the album.

Infernal Assault have found their niche and they do not lack integrity. Moreover, their songs are presented in a sound that exactly fits the needs of the filthy sub-genre. Producer Magma has already created this kind of sound for further German formations and neither Eurynomos nor Megathérion had a reason to complain. His albums always offer this proper portion of dirt without falling victim to a powerless overall appearance. Spectres of the Night does not sound blurred, but it celebrates its underground authenticity. And so, there is not much to grumble. Perhaps the four-piece should slightly increase its level of insanity or rawness, but that's not a crucial factor. The most important thing is that the double EP leaves a coherent impression. It reflects the conviction of the band members and it avoids lukewarm tracks, albeit there is still room for improvement, both in terms of quality and quantity. So what - Infernal Assault are alive and "Bastard Cult" shows the way and gives me hope, even though Cruel Force do not rise again from the dead.