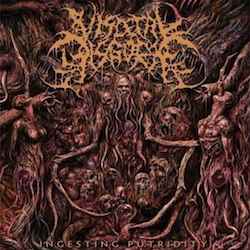 The debut album by the brutal slamming death, or if you will, "multi-death" genre'd band Visceral Disgorge. You'd expect this album to mix in with all the other modern slam bands considering its cover, which looks like a modern slam cover. But it's nowhere near the atrocity of modern slam. What this album is gold. A treasure.

I used to avoid this album because I thought it was one of those shitty slam crap albums by bands like Embryectomy or Vulvectomy, but it's actually far from that, lmao. Take brutal death metal, (TRUE) slam, and deathcore, and this is what you get, and it's not bad either. The way this band mixes the three genres together is very great, and they did a great job on this album, that's definitely for sure.

The main factor that keeps this album all together is the drums, that fucking snare! The snare drum sound is one of the best I've ever heard in brutal death metal, perfect drums right here! The guitars are great, good tremolo picking with lots of high notes and little sections to top everything off. The vocals go along perfectly with the drums too, similar to your average rap/hip hop beat. All the slams here are on point. Extremely catchy and very ear-grabby. The vocals also add a good feeling to all the music as well. All the instrumental factors of this record are exactly how brutal death should be!

The album gets an 8.8 because of how talented it is! The music on this record is honestly ahead of its time, there wasn't really any albums like this that fused brutal death and slam this good and advanced until this one came out. The guitar playing obviously takes so much inspiration from other bands, especially Dying Fetus and Devourment. The structures of the songs and the songwriting skill is magnificent, it’s pretty clear they took lots of time on each and every song considering the average song length is 5 minutes long. Also, all the spoken parts/small interludes add more to the albums' variety too. It describes the story and topic of the songs perfectly.

I took away the 1.2 because the album drags on a little too far and the songs are slightly repetitive, but it isn't THAT MUCH of an issue. If you're a diehard brutal death/slam fan, (which I am (brutal death)), you probably won't get tired of this. Basically, what I’m saying is that even though the album is good, it's hard to listen this entire thing in just one sitting, because the average brutal death song is 3 minutes. Gets kinda tiring to hear the same thing over and over for a long time. But that doesn't resent at the music or the band, I just wish the song lengths were shorter. That's all.

The album has its ups and downs, but the album as a whole isn't bad at all.

Other than the music, the main reason why I'm very impressed by this album is that this is their debut album. God damn, such an impressive debut album for a band to start off with. This is some self-defining shit right here, and Visceral Disgorge is showing that they have the talent to do what they do. This proves that some bands still make actually good BRUTAL DEATH music and albums with this type of artwork, and not just crappy ass slam with over-the-top art, titles, and lame music.

Recap: Ingesting Putridity is a great ass album, amazing instrumentation, song structures, and good lyrical themes and lyrics. The downside is that songs are too lengthy and slightly repetitive, which'll probably bore if you try to listen to the entire album in one sitting. Nonetheless, still a great album, and is an essential for the average brutal death listener.

I'd give this album a 100% if the songs weren't so long and the songs didn't drag on as much, it's a fairly long album, but it isn't really an issue. If you enjoy death metal in general or are trying to find some more good stuff to listen to, I recommend that you try out this album. It gives you tons of variety.