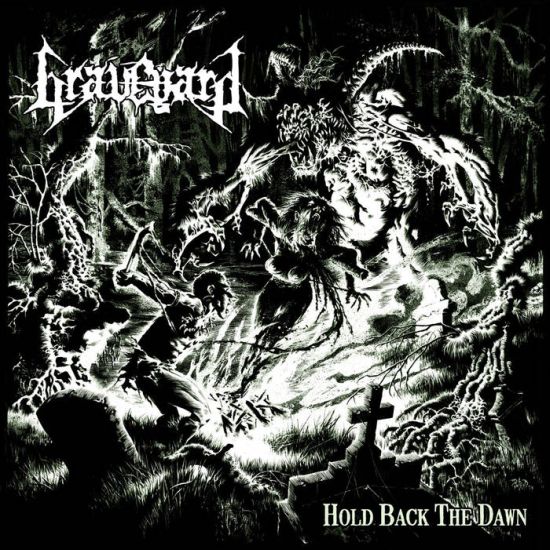 Hold Back The Dawn from the Spanish death metal heretics of Graveyard drove me through a bottomless pit full of unspeakable abominations that only want to drain you of your life. A very interesting and enjoyable listen indeed; fans of old school death metal with Swedish and very obscure vibes be ready to rejoice.

After spinning Hold Back The Dawn several times I came to the conclusion that this is a declaration of principles from Graveyard, a semper fidelis statement to death metal and its darkest approach. Just taking a look to the front cover (unspeakable horrors coming from a graveyard to possess worthless human lives) and you can tell these guys are not writing songs about romance, love or peace. Themes vary from damnation, death to summoning eternal darkness upon mankind; they hit the nail of what old school death metal should be. The songwriting structure leads you to a mood where light is impenetrable and the production creates a cavernous and somber atmosphere.

“Destroy the world so we may be in death forever free” growls the singer in the track 'Winds Like Daggers' that from the double guitars to the general songwriting execrates old school Swedish death metal omens. I guess the best way to picture their sound is to put Grave and Unleashed in a blender and mix them with some Lovecraftian spices. You can find evidence of this depiction of their sound in the song called 'Of Extant Cults And Living Terrors'. Do not expect ultra-fast brutality here, Graveyard keeps it slow dark and ominous. The doomy approach is omnipresent in all the album's general ambient. It is not a gimmick to sound evil, it is the sound the band has developed through their career.

In my opinion, the whole album is a 10 out of 10 for the competent musicianship in all departments, cavernous and grim atmosphere that depict decadent landscapes and old school death metal vibes. As I said before, if you are new to the genre and you're looking for complex technique, fast songs or innovative/modern death metal on this album, well, you should look elsewhere. On their latest release Graveyard offers  a more nostalgic approach to honor those bands that once dominated the catacombs of the underground but now only live by their names.