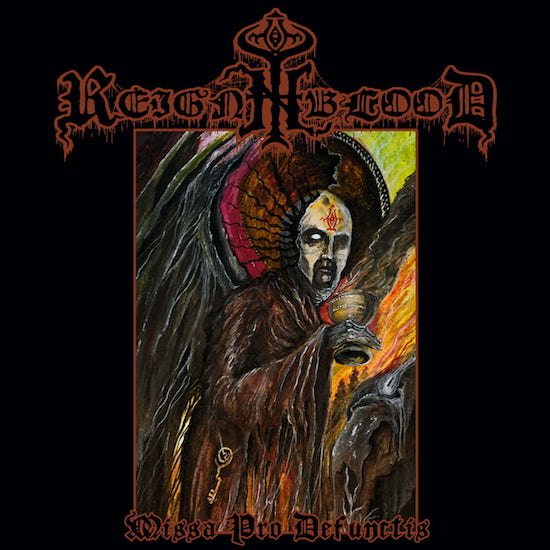 "Raining blooood - from a lacerated sky..." - oh, I beg your pardon, wrong record. Here we have Reign in Blood from Germany. First thing I know about them is that I absolutely do not know anything about them. Second thing is that they release their comeback via Iron Bonehead and this is usually something that makes me shiver - for good reasons! Too many chaotic albums have seen the light, because the permanently busy German label gave "promising" musicians a chance. At the end, everything was completely destroyed, in particular my nerves. Old stories aside, Missa pro Defunctis does not focus on total devastation. The first regular track, "Dawn of a Dying Soul", scores with a voluminous overall appearance, an all-embracing melody and, well, passion. Right from the get-go, it becomes clear that the two artists behind the project celebrate their personal dawn of their black hearts. No, the comeback does not really sound like the true Mayhem, but I guess it needs a lot of work and fervor to pen an album like Missa pro Defunctis. It's energetic, violent and vehement, but it also has fascinating melodies and its non-conventional song patterns do not lack comprehensibility. No doubt, the duo did not start the recordings without high ambitions.

Compared with thrash or traditional metal, black metal is less dependent on the quality of its riffs, simply because there is always this atmospheric component as well. But this does not mean that Reign in Blood neglected this guitar-related factor. Their talent for the creation of great and profound riffs gets obvious in the title track. A stirring, somehow boiling riff pushes the opening drum into the background and sets the sail for another hellish journey through frightening crater landscapes. The majestic size of many parts of this track, and of the remaining material as well, can drive the audience mad and sometimes the competent duo reminds me of a harsher version of Geist, another great German black metal unit - listen to their masterpiece "Galeere". Do it right now! If you do not like its title track, take a look in your passport and realize that your name is Wimpy Poser. You say I overshoot the mark?

However, Reign in Blood have nothing in common with dudes who hate infernal sounds. Even better, they also do not join the ranks of those combos that put two or three strong pieces at the beginning of the album before they present fillers, fillers and even more fillers. Missa pro Defunctis does not reveal tunes which have nothing to say. The high level of quality - as well as the enormous degree of intensity - remains more or less the same during the entire playtime. This is not to say that the extremely heavyweight album lacks dynamic, by far not. This detail just underlines the fact that the Germans worked meticulously on the material to realize their aforementioned ambitions in the best possible manner. Not to mention the vocals. They express all forms of human chasms in a skilful way. Perhaps the lead singer was in a kind of delirium during the recordings, who knows?

Production-wise, I just can raise my iron, blood-filled cup - oh shit, it's just raspberry juice - and drink a toast to the sound engineers. The remarkable density of the mix, in particular the merciless guitar sound, proves evidence that someone did the job who has internalized the magic of black metal very well. And in the case of Reign in Blood, we speak about pristine, brutal black metal that does not lack great melodies as well. Trendhoppers will have no good time with this diabolic and steadfast document of the true essence, because its fundament is deeply rooted in the old school of the black movement. So, it's up to you to discover the cruel charm of songs such as "Black Hole" whose smooth flow at the beginning could originate from Magoth as well, but its excellent melody line at the end gives the number an individual touch. Or enjoy the icy riffs and lines of "Metamorphose with the Universe", another embodiment of pure blackness. Even the almost industrial-influenced "Anima" hits the nail on the head while swallowing the listener pleasurably in a black maelstrom at the end. In short, I am very impressed by this almost unique output, even though the top position of Slayer's bloody reign remains - naturally - untouched.

Formed in 2004, Reign in Blood brings their traditional blasphemous occult riddled black metal broomstick to the grand stage. Upon hearing the name of the band, Slayer automatically came to mind, and though I was expecting to hear some staples of such, I was in no way prepared for this masterclass effort. Reign in Blood has a lot going for them here, although a decade or so has passed, without putting out new material due to band members leaving and personal issues, the music tells of excellence and appears free of any negative hindrances due to the drawbacks encountered, if anything it has improved/matured with time to say.

I had no prior knowledge of the band; but through Reign in Blood's sophomore full length album Missa Pro Defunctis, I was more than eager to check out their earlier material; and after doing so I’m pleased to find yet another exceptional band hiding amidst the shadows of the underground. Many try to ‘wear their influences’ and turn out sounding like karaoke versions of whatever band/s they’re supposedly influenced by; so, upon seeing the band’s name, my stereotypes activated. However, the music here on Missa Pro Defunctis fucking rips!  In addition to borrowing some of Slayer's early staples; some Bathory, and early Mayhem (Norway) influences can also be identified during the 41 minutes of Missa Pro Defunctis. These influences have shaped Reign in Blood's music into something that can be identified with ease. For a follow up to 2009’s Diabolical Katharsis, they have performed extremely well when factoring in the major gap between their debut full length effort and the current.

Upon hearing ‘Dawn of a Dying Soul’, immediately I could tell much more effort had been put into song structure, that in addition to having Reign in Blood's signature ways of speeding drums, saw an adhesive combination of 1st and second wave black metal with the Slayer-esque screeching guitars, the Gaahl inspired vocals (specifically those at Wacken 2008 e.g. 'Wound Upon Wound'), and the poke at early Mayhem riffs. When blended together, these borrowed resources form a recognizable but simultaneously diverse creation. I did also notice the similarity 'Black Hole' shares with Communion’s (Chile) ‘Funeral of Mercy’ by means of the leading guitar riff. Not 100% identical due to the faster drumming used but does have a bit in common with that song.

Please forgive the name dropping; however, it does not take away from the effort and music as a whole which is great. The way Reign in Blood blend so many styles into their songs that in turn would carry on making each entry memorable, tells of thoughtful musicianship. I find the hopping-around different tempos and rhythm changes to be an audible joy such as heard on ‘Metamorphose with the Universe’, ‘Missa Pro Defunctis’, and ‘Wolf Hour’. Vocally D.Raise’s voice is a stir of aggression and lament that works well in both the furious and melancholic entries on Missa Pro Defunctis. The riffs are plentiful, Malus and D. Raise put on quite a performance of tremolo picking and soloing with matching intensity conjured throughout the album. ‘Anima’ is more on the melancholic side of things but has a looming shadow of hostility clenched to it. And for someone that enjoys 1st wave black metal, Missa Pro Defunctis does not disappoint or sounds fatiguing due to its lengthy run; there is enough happening to keep the interest of the listener.

One entry’s theme appears to be connected to and derivative of tombstone titles, hence ‘Domus Mortuorum’ and practices carried out by the Catholic Church, ‘Missa Pro Defunctis’. Other songs can be interpreted with many variations but where the sound and aura of the recordings are concerned, I would be lying if I said they don't hold fast to the spirit of 1st-early 2nd wave of black metal. Missa Pro Defunctis is a gratifying listening experience that lasts and is one of the better first wave black metal releases of 2019; take and inspect any element used in the creation of this long overdue record and you'll find that Reign in Blood are a serious class of musicians.