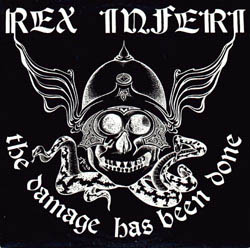 Back in 1986, I was on vacation in Italy and I entered a record shop in Florence. I saw the EP of Rex Inferi and I asked the seller a very intelligent question: is this more like Kiss or more like Motörhead? He was probably a very patriotic Italian, because his answer was: this is more like Vanadium. I still had no clue how this vinyl would sound.

However, I bought the record, and this was the wrong decision. The synthetic keyboard intro is just useless, but the regular tracks are really predominantly lame. The band mixes stale hard rock elements with some slightly harsher ideas and the seventies shimmer through many guitar lines. I am no fan of the music of this decade and it's probably unfair to blame pioneers of Italian metal for the awkwardness of their first musical steps. However, the bitter truth is that the album bleeds from multiple wounds. For example, the high-pitched vocals suck. They lack power and charisma. Some guitar lines fail to create a proper heaviness, although there is a small number of acceptable riffs and leads. From time to time the band gets crazy and tries to embrace the speed metal maniacs ("Axeman in Black"). Indeed, the instrumental parts really develop a certain pressure. Nevertheless, this is no classic of the genre, but a pretty decent number at best. The remaining compositions sound provincial and more or less amateurish, albeit there can be no doubt that the band has integrated many ideas in each and every regular track - but, as much as I regret it, mostly mediocre ideas.

The songs were obviously recorded by someone who had never made a metal production before, or she/he just wanted to create this relatively light sound with feeble drums. The heaviness of the guitars shows up every now and then, for instance during the pretty long, competent yet slightly egocentric solo of the closer, but honestly speaking, the vapid mix meets the quality of the songs on an equal footing. So here is my message to all metal archaeologists: there is not really a cause to unearth this vinyl.