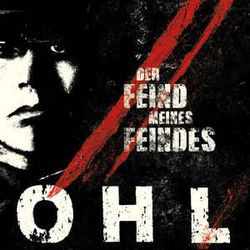 Der Feind meines Feindes is the German translation of "Enemy of my enemy" and we all know that the enemy of my enemy is my friend. Guys like Churchill or Stalin (the original Stalin, not OHL's veteran guitarist) would agree, but unfortunately they are temporarily not available. So, we can concentrate on the output from 2017 and its twelve new anthems of anger. First things first, they all have one feature in common: they reflect the unchanged high energy level of the band. Doubtlessly, Deutscher W and the other dudes do not belong to these poor creatures who die with 30 and are buried at the age of 90. The musicians are still full of youthful enthusiasm and they do not tire of telling us their street philosophy. Simple yet clear lyrics go hand in hand with simple yet clear song patterns - that's punk.

But it is nearly more than punk, because the riffing and the velocity of the fastest tracks border on thrash / speed metal. However, the attitude makes the difference; OHL are much more political than almost every typical metal formation. Furthermore, excessive guitar solos do not show up. That's consistent, because egocentric excursions are not compatible with the punk-based approach of the German quartet. The authentic guys still focus on the essentials and so the lacerating guitars and the passionate vocals shape the material. Their clear contours make it easy to internalize the songs quickly and I bet that nobody who liked the band's previous works will be disappointed when listening to this full-length. Neither the compositions nor the well-defined, direct and robust production leave much room for optimization. Instead, the pieces impress with a remarkable hit rate. Allow me to give you three examples.

The first smasher is "Stille Nacht" ("Silent Night"). I know it's shocking, but this is, probably much to your surprise, not OHL's version of the pious Christmas song. This track barrels along the border between thrash metal and extreme punk and its vehemence is fascinating. Yet even more impressive is the work of the octopus behind the drums. This creature makes breathtakingly good use of its arms and plays dozens of breakneck fills, only interrupted by some wild rides on the cymbals. "Die Pest" does not give full speed ahead, but its ominous and nearly macabre chorus has an almost hypnotic effect. Moreover, the lyrics achieve 9.5 out of 10 points on the "Deutscher W scale of uncompromising directness". The message of "Wahrheit" is less radical, but the composition, especially its chorus, also shines with a perfect flow.

To avoid misunderstandings, the further bullets hit the bull's eye, too. It's totally irrelevant whether you dive into "Die falsche Saat", "Mit dem Rücken zur Wand" or "Krieg der Kulturen", you will not understand why an obviously crazy guy thought that it is necessary to invent the skip button. (But buy an album of Sabaton or Manowar and you will quickly raise the glass on the inventor of the waste incinerator.) Der Feind meines Feindes is a coherent work from the beginning to the end. It convinces with a very well flow, because it does not suffer from half-baked pieces and even the slightly weaker numbers have some fine riffs, precise drumming and a dark atmosphere.

By the way, exactly this atmosphere mirrors the general mood in OHL's and my homeland. Germany 2017 / 2018 is a hardly explainable monster. On the one hand, it is still a rich country with a prospering economy, on the other hand it is in a critical state due to a more or less complete loss of political culture. OHL alone will not change this situation, but with regard to their expressive lyrics, it's good to know that there are more observers out there who share this point of view. And so there can be no doubt in view of this mature, non-experimental work: Der Feind meines Feindes (or the enemy of my enemy) is my friend, at least as long as we speak about the here reviewed album which is filled to the brim with exciting tracks. By the way, the band also has a song called only "Der Feind". It is the fourth track of another great album which is called... but I guess that's another story.