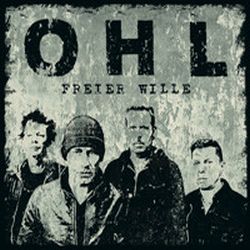 Dear friends, here comes the Oberste Heeresleitung, abbreviated OHL. This band led by lead vocalist "Deutscher W." is something special. "W" stands for "Widerstand" (resistance) and indeed, this guy does not shy away from any kind of conflict. This is no matter of course in Germany, the country that calls it politically incorrect to raise the voice against Islamists. Deutscher W. doesn't care. He rages against brutal prophets, but he also hates extreme political beliefs. In other words, he is the most radical representative of democracy far and wide. And he uses a very direct language.

OHL has its roots in the punk movement and Deutscher W. and his changing comrades never modified their song formula, if we leave the gothic/dark wave-influenced "Jenseits von Gut und Böse" out of consideration. It is therefore only logical that Freier Wille offers twelve direct, straight and no frills tracks and many of them score with a remarkable velocity and sharpness. Just like so many times before, OHL master the challenge to fascinate the audience (or at least: me) with ingenious yet simple riffs. Both the guitar work and the striking voice of Deutscher W. shape outstanding tunes, regardless of their velocity. High-speed outbursts such as "Feinde der Demokratie" or "Viel Feind viel Ehr" seem to be unbeatable, but a less swift number like "Verblendet" also reaches perfection. The conventional song patterns do not lower the effectiveness of the tracks. The precise guitars and the tight interplay of the band members lend the album a partly clinical, partly cruel ambiance. Not to mention the martial lyrics. Even though I do not agree with each and every text, I must say that I like OHL's lyrics very much. They do not beat around the bush and they are definitely not interested in being everybody's darling. This mindset deserves respect.

The material has a dark touch and this feature gets most obvious in "Kein Leben nach dem Tod", a mid-paced, anti-religious song. Anti-religious means that the lyrics are against Christianity and Islam. Many bands, German as well as foreign formations, only express their hate against Christianity, but this is not very courageous in view of the rather pacifist Christians. OHL are different and I like their more global view. By the way, "Kein Leben nach dem Tod" boasts with a brilliant chorus which demonstrates the band's affinity for catchy yet metal-compatible sequences. "Kein Gott steht über mir", another song that spits on religion, scores with some earworm parts as well and sometimes I really wonder that OHL do not have a much bigger status. But as mentioned before, they do their own thing in an almost painful manner and this is nothing that German media like. Maybe this is the reason why I like their songs all the more. I admit that the restrained "Der Herr der Kriege" pales beside the other tracks, but even the weakest song of this masterpiece is not bad but acceptable. However, so many tracks leave their mark impressively due to their swift rhythms, the concise choruses and the excellent flows. "Feuer der Freiheit" and "Tradition und Rituale" are just two of them.

The marching drum of the closer "Irgendwann" marks the beginning of the end of an absolutely exciting album. Due to the clear musical vision of the protagonists, OHL have always been a trustworthy distributor of good music, at least in my humble opinion. Nevertheless, a full-length of such quality is anything but self-evident, even for evidentially competent combat units. Given this situation, everybody with a little weakness for snotty punk structures, metallic riffs and an upright mentality is well advised to get in touch with these veterans. By the way, today would be a good day to enter their musical cosmos, because one of their early hits is called "1. Oktober". This is the opener of another great album which is called... but I guess that's another story.