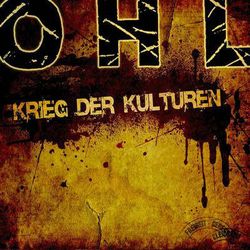 No doubt, the title track of Krieg der Kulturen is a rapid, straight and vigorous song whose lyrics offer an unsparing analysis of a difficult political situation. It reaches the high level of the typical OHL jewels with great ease. Yet there is a little problem in the context of this review: this tune is not among the songs of the here presented, eponymous album. "Krieg der Kulturen", the track, ironically marks the closer of their current masterpiece "Der Feind meines Feindes" - and this ironic twist of fate is almost characteristic for the record from 2009. If I want to hear the best tracks of OHL, Krieg der Kulturen, the album, is not my first choice. Yes, there are a couple of exciting numbers, but compared with their other works from the 21st century, I cannot ignore the pretty big amount of acceptable yet not outstanding pieces.

My non-fickle compatriots show their usual approach and therefore it might be that my slight discomfort is just a matter of personal taste. From my point of view, the riffs are decent, but the level of penetrating power remains improvable. The first climax that makes my blood boil is "Deutschland nicht über alles" due to its great melody lines, the fast tempo and the great verses. "Mich belügst Du nicht" marks the second sledgehammer, another velocity-driven storm of crunchy guitars. But a relatively big number of tracks reveals minor flaws. The opener, for example, holds an explosive guitar line after the short introduction, but its chorus remains somewhat colorless. "Kein Gottesstaat", the second track, suffers from a pretty feeble bridge. Don't get me wrong, there is still some substance in each and every composition, but I can't get out of my mind that the guys can do it better.

In view of these little weaknesses of the material, it is all the more important that the production fits the non-conformist mentality of the band. The full-length shines with a transparent, clear and precise sound. "Die Krieger ziehen in die Schlacht", the third very good track illustrates that it does not necessarily need fast-paced rhythms in order to leave a trace - and its impact is, among other things, based on the powerful production that underlines the merciless atmosphere of the composition. The sluggishly crawling monster stands in the tradition of previous dark and eerie pieces such as "Lichtkegel zerschneiden die Nacht". By contrast, its direct successor, the hammering "Mein eigener Prophet", constitutes the return to rapid rhythms. This song is among the better ones here as well and its lyrics once again pick up a typical OHL-topic: believe in yourself, be your own God.

Too bad that even Gods can make painful experiences. Sometimes the spirit is willing, but the flesh is weak. (The older ones among us know what I mean...) In the last quarter of the record, it becomes quite obvious that the self-assured dudes run out of ideas. A ten-track-configuration would have been a better format. But in view of the real length of the album, it cannot be denied that Krieg der Kulturen is the weakest link in the strong chain of their 21st-century-releases. Anyway, it is never a mistake to raise the voice against political extremism and religious fanaticism. Moreover, the expressive vocals of Deutscher W. are still a strong feature and so let me sum up: Krieg der Kulturen ("War Between Cultures") would have been a fantastic EP, but it is only a solid full-length with an acceptable number of peaks. I miss some real neckbreakers that are bright like 1000 suns. By the way, Hell wie 1000 Sonnen is the opener of another great album which is called... but I guess that's another story.