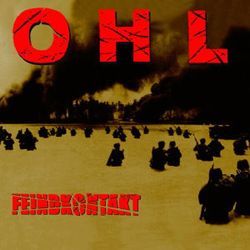 Come hell or high water, some bands don't change their style. However, this does not mean that all of their records are on the same quality level. Please compare the almost immaculate "Back in Black" with the faceless "Blow Up Your Video" or listen to the polished "Pleasant Dreams" directly after the ingenious "Rocket to Russia". I am pretty sure you will feel the difference. Either way, OHL are among these units. They cannot be blamed for stagnation, they just have always been immune against experiments. Nevertheless, Feindkontakt, their work from 2006, is significantly better than many of their further, stylistically very well comparable albums.

First of all, the guitar work of Stalin is extremely impressive. This is not to say that he reveals outstanding technical skills (or I am not able to identify them). What really counts is the excellence of his riffs that lend the songs an irresistible drive and a fanatic momentum. In its best moments, the material connects these features with an enormous catchiness. "Feind der freien Welt" does not only kick off the album in a rapid manner, it also offers one of these highly memorable sequences of Feindkontakt. Its chorus takes the shortest way into the listener's brain without having bought a return ticket. Or experience the perfect riff of the extremely wild, ultra-fast but never chaotic "Die Fahne der Freiheit". Of course, OHL have never delivered riffs in abundance, but they are able to focus on one ingenious riff that carries the aforementioned song directly into my personal hall of fame. And it goes without saying that this riff also did not buy a return ticket. No doubt, the first third of Feindkontakt defines absolutely flawless punk, reduced to the essentials and without a single gram of fat. The direct and angry "Der Heilige Krieg" constitutes the perfect link between the opener and "Die Fahne der Freiheit", while "Lichtkegel zerschneiden die Nacht" highlights the scary facet of OHL's art. Its atmosphere matches the air raid scenario of the lyrics extremely well. The composition conveys the feeling of mortal fear that reigns on both sides of the front in a terrifying manner.

Too bad but simultaneously almost natural that OHL cannot keep this gigantic standard during the entire album. But the band also does not offer half-baked tunes, by far not. Each and every song adds value to Feindkontakt, even though the last iota of brilliance is sometimes missing. One or the other song does not play in a class of its own, but the menacing and slightly psychopathic "Heimatlos", the swift and excellently flowing "Stolz deutsch zu sein" (it is the most "opulent" track with a length of 3:41 minutes) or the ferocious declaration of war "Eure Tage sind gezählt", a close relative of songs such as "Gott mit uns", show that the formation is not at risk to run out of steam. Quite the opposite, Feindkontakt presents a firework of dynamic, liveliness and fury, not at least because of its technical implementation. The precise, perfectly balanced production does not lack pressure, aggression and resilience. It seems as if the veterans know exactly the sound they want to have, because all of their 21st century albums score with a very suitable and extremely strong mix.

Finally, I observe with satisfaction that Deutscher W has mixed his usual 300 words anew and presents the typical OHL topics. His vocals are strong and powerful as always and form a very good and expressive medium for the sinister lyrics. The background vocals increase both the intensity and verve in songs such as "Niemand" and all in all, there is nothing to grumble with regard to the performance of the singer(s). In a nutshell, Feindkontakt is just a nearly perfect album. By the way, the band has more almost perfect tracks, for example "Der Fall Saatze". This is the twelfth track of another great album which is called... but I guess that's another story.